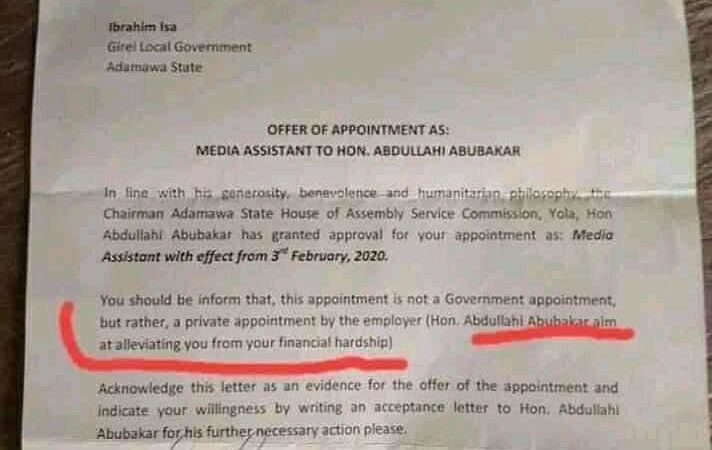 ​A Careful Look at the Letter of Appointment from Adamawa State

There is something funny about the letter, from the Chairman of Adamawa House of Assembly Service Commission, to a newly appointed media aide in his office, that I nearly laughed it off and dismissed it as a direct consequence of northern illiteracy. I know many people would do same. But after a careful read of the letter, here are some of my observations and it is about Nigerian politicians and their appointees, and not about the north or illiteracy.

1. There is a mindset with which Nigerian politicians, political appointees and direct beneficiary of state power, deal with those that work directly under them. There is an attitude with which those who are in charge of state power at all levels in Nigeria, manage the workforce and this has direct impact on the relationship between government and progress. Now, when you read the letter more carefully, you will see that the message is clear and the new media assistant is simply told that he is getting a favour, a huge favour by the  appointment and he ought to be grateful and watch it. Fine and good. He has just been acquired by his oga and he has to do nothing else but be grateful and not disturb the peace. That is to say he has no opinion, no advise, no suggestion, no nothing. This is one clear reason why many public office holders in Nigeria fail. You are not really appointed to make an input. This makes a nonsense of the merit argument and rightly so. We can only talk about merit if the purpose of the appointment was for public good.

2. The new media assistant has been reminded of his poverty. I mean, he stated it openly. Down here in the south, it may not be written on the appointment letter, but it will be said anyway. Somehow, you will be reminded, taunted and harrassed. Note that it is not for nothing that you are reminded of your poverty and hardship. It is aimed at keeping you in check. “Remember how you used to suffer before I picked you” and all such lines, are targetted at one thing; emotional blackmail. Now, here you are as a youngman who is priviledged to be, not at the corridors of power, but at least inside the compound of power, for if power has corridors, then there should be compound too, in the understanding that all men are not equally priviledged in power. So now, while you are thinking and others are convinced that you are getting close. One of their own is getting in and will soon start making some impact. You end up shocking not only those people but also yourself because, you will see that is, if you have not already seen, that your input is not needed. Even major public officers like Ministers, Commissioners, Advisers and Assistants to the Chief Executive, suffer this too. Well, if they lose their voice, they should at least enjoy their money. And this is only but the begining of the tragedy of leadership failure. The point here is that the political class seems to be saying to the appointee, yes you have been appointed but don’t come here and make noise. Keep quiet and don’t try to tell us what is right  or wrong. 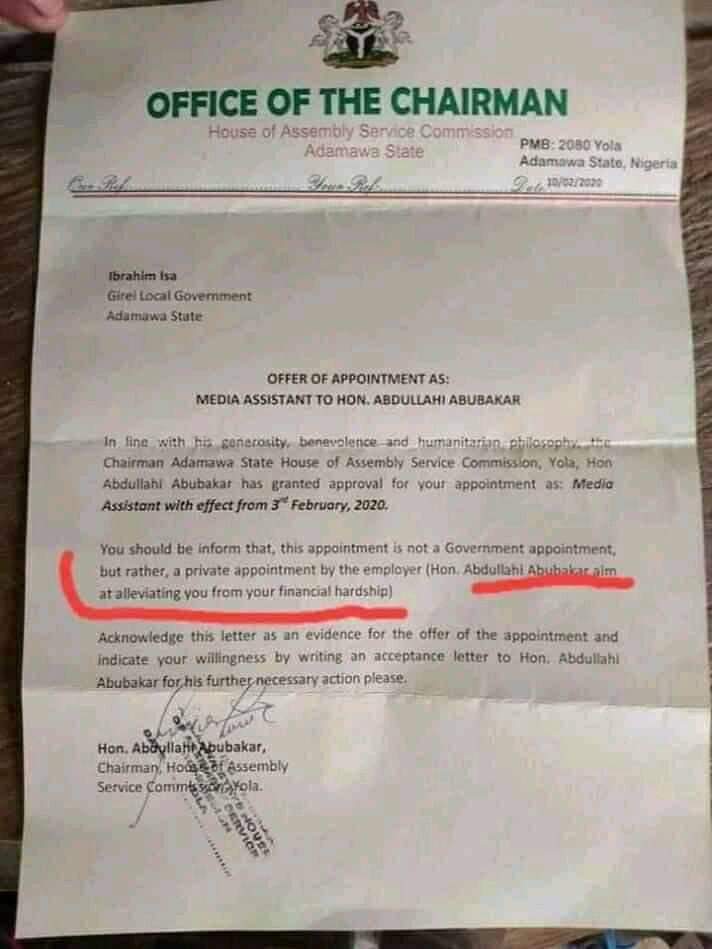 3. The letter has it clearly that this is a private appointment. Ofcourse, no government linked appointed is private. There are so many things to say here but it is sensitive. However, the major thing is that an appointment into any government office though at the discretion of the principal, is an appointment into public office which has been provided for, by the state and which remuneration also comes from state funds. But why they make it look private is so that you will actually think it is a special favour done to you. Understand that they are taking every precautionary measure to put you in serious check. So now, you have to be a good kid and behave yourself.

4. The appointee, if a very bright chap and not naive, sees all the flaws and still accepts. The system has left him with little or no option, except the dignity of his own person which if he follows, may keep him hungry for life. That is why you see extremely brilliant people with the Gen. Buhari government and indeed, any other government, literally thinking from their bellies. And you wonder what is going on. Nothing except that the terms of their service to the nation have only afforded them the opportunity to serve themselves and their pockets, then shutup or at least, only praise and worship the government, and then go home.

5. This is a Nigerian problem. From north to south, it is the samething. Those in power mostly don’t want you coming to disturb their peace with your discomforting ideas, advise or suggestions. That is what that letter is all about. It is not about north or illiteracy.