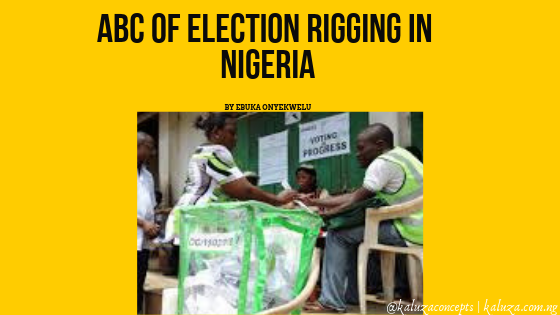 As the Nigerian General Election of 2019 gets here; many people have been worried about the possibility of rigging the election such that their vote will not count. Over a few years, I have been an active participant in Nigerian election process, so I thought of explaining to the best of my knowledge, how elections are rigged.

In the past, ballot papers were not coded. So even if INEC released the same ballot papers as the number of people on the register of a particular polling unit, ballot papers from other states, local governments or wards, can be smuggled into the ballot box and they will count. Not anymore. Also then, polling units have large numbers such that the absence of voters can be easily taken advantage of, to gain large votes through irregularities. In fact, INEC does not bother about anybody wanting to tamper with the ballot box. Nobody will even attempt to stop anyone wanting to run with the ballot box for the simple reason that the polling unit will simply be taken out and all the votes cast in it cancelled and it is very easy. This is the same and exact situation in all the over one hundred thousand polling units across the country. 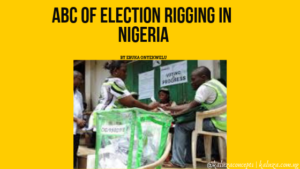 Therefore, if in every polling unit, the exact number of ballot papers printed corresponds with the number of registered voters, how then can the election be rigged? It is practically impossible, if all the voters go to their respective polling unit to cast their ballot. But here is the problem. Do we all go to cast our votes? When we fail to go and cast our votes, what we have done is create room for possible election rigging. For instance, if out the 600 registered voters in polling unit A, 200 people showed up to vote, what happens to the remaining 400 ballot papers? Of course, they are cancelled / ruled over right, at the polling unit, by the INEC officials and they cannot be used. But what if somehow, the ballot papers manages to be smuggled and used arbitrarily? Well, it is because the people who are supposed to vote are not there to vote. Frankly, there is no way an election will witness 100% participation. In a voter register of 600 voters, maybe a few people would have died, a few may have relocated, and some may not just be around or disposed to going to vote. But if we have 65% to 70% participation, it is practically impossible to rig the election outcome, in any way. In fact, INEC has further frustrated rigging by cutting down the number of voters, per polling unit. So if the participation is high, nobody can rig.

The power to rig an election is in the hands of those who do not value their civic responsibility to go out and cast their vote. The power is in your hands, Nigerians! If you go out to vote, nobody can manipulate your electoral choice.