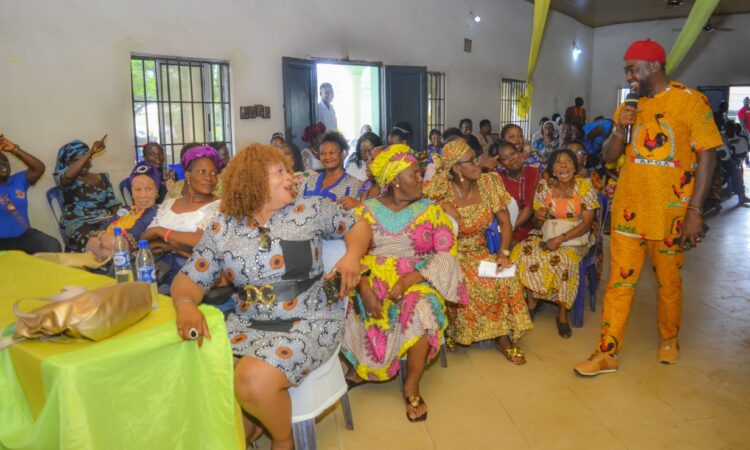 Idemili South local government chapter of the All Progressive Grand Alliance – APGA, today received in visit, the consultative train of Uzuegbuna Okagbue, APGA frontline aspirant for Anambra Central Senate. Idemili South is the 6th out of the seven local governments that made up Anambra Central senatorial district, which has been consulted by Uzuegbuna Okagbue whose message of hope and change, deep faith in God, heralds a new political beginning for APGA, in Anambra Central as attested to, by party men and women.

In his remarks, Hon. Tony Oneweek Muonagor who also aspires to Idemili North and South Federal Constituency on APGA’s platform, observed that Uzuegbuna has all it takes to represent Anambra Central at the senate, adding that if APGA wants to win the General Election, then, the party should try someone else. “In football, after losing and losing, if you want to win, you have to change tactics”, Hon. Mounagor said.

In his address, Uzuegbuna said he asked to see APGA leaders in Idemili South to inform them that he is running for senate and to ask for their support. “All of you here are APGA Idemili South and that is why I have asked to see you all”. Delivering his iconic message of politics without bitterness, Uzuegbuna Okagbue said that he is prepared and ready to serve the people of Anambra Central better, but he is not asking them to believe him. He then urged party faithful to carefully listen to him and also listen to the two other aspirants; Hon. Dozie Nwankwo and Sen. Victor Umeh and thereafter pray, asking God to direct them to make the right choice among the three of them. “I have come so that you will look at me, then look at our two other brothers running for senate and decide who you support based on who you think will do better. The person you support will win”, Uzuegbuna said. 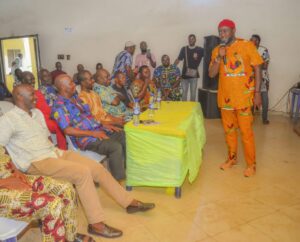 Responding, Idemili South APGA Chairman, Chief Joseph Ezeanya described as novel, Uzuegbuna’s approach. “Uzu has come here and opened his heart to talk to us. He did not speak ill of anyone. Our prayer is that God will grant his heart desires”.

Mrs. Stella Mbamalu who said the prayer as requested by Uzuegbuna Okagbue from Idemili South APGA party men and women, described Okagbue’s style as new and different. “He did not come here to talk like politicians”, she said. She then prayed God to “Pave way for him, protect him and fulfill his heart desires”, while affirming that “He will go with youthful strength to the senate”.  Oluchukwu Ilogbenu the ward chairman of Nnobi ward 2 and the Chairman of all Chairmen in APGA Idemili South, in his vote of thanks, appreciated party leaders for coming out and thanked Uzuegbuna Okagbue for his very warm presence, noting that he knows Uzuegbuna is prepared for the project he has embarked on.