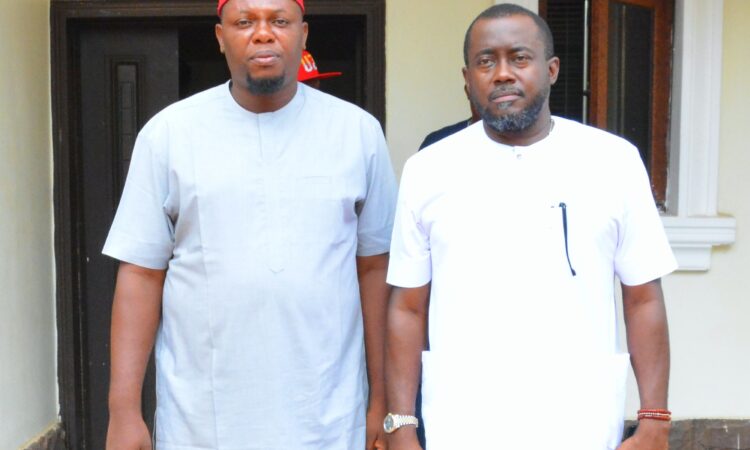 Anambra Central leading APGA aspirant, Uzuegbuna Okagbue, on Saturday evening paid a consultative visit to Hon. Ikeobi Ejiofor, who was the longest serving local government transition chairman in Anaocha local government. Ikeobi who extolled Uzuegbuna Okagbue as a good party man and a capable man who has proved his mettle, admonished young people to look out for each other.

Speaking on why he came to see Hon. Ikeobi, Uzuegbuna said that he came to inform him of his aspiration to the senate and to ask for his support. According to Uzu, “I have come today to inform you properly that I am running for senate. When someone does not know who another is, then, he may tend to disrespect him. So I have come to this family today to inform you, your brothers and the entire Obeledu that I have expressed my interest to represent Anambra Central in the senate under our party APGA. In a large household, no one person overworks himself, responsibilities are shared. Anambra Central has capable people. APGA has people. So I have come to talk to you, my friend to support me in this journey because I know that with your support, we will have it easier”, Uzu said.

In his response to Uzuegbuna Okagbue’s remarks, Hon. Ejiofor thanked Uzuegbuna while expressing happiness over his aspiration, noting that he is following up with his activities on the media. “First, I am happy with the way you are going about this and I admire your aspiration. From what you have said, part of it is that young people or younger people should be given a chance at the highest level. Your movement has shown that you are prepared; it shows courage and vision. Young people should support fellow young people, in case of tomorrow; these have been part of our conversations in the past. Well, I am a leader and also a follower, therefore, I consult. But as you have come, Obeledu knows that you came. We will do proper consultation. Keep doing what you are doing, but whatever I have to do for you, I will do it”, Hon. Ejiofor said.

Reacting, Hon. Ejiofor’s younger brother who is the local government chairman of the Youth wing of Anambra State Association of Town Unions – ASATU, said that he is happy today to have heard from Uzuegbuna. “Today, I am happy. When my brother told me that you are coming, I said I will be here. When you were talking, I paid careful attention and I was greatly encouraged. With the ongoing clamor for youth to take more active part in governance, we have discussed at our level in ASATU. After primary, we will take over the fight. This is our fight. If we have someone like you at the senate, what else? In fact, I would have been running for House of Assembly now, but I stepped back. But after listening to you now, if forms were still available for sale, I would have gone to buy forms and contest for House of Assembly. People like you are a source of inspiration and encouragement to young people. God will be with you and you will come out victorious”.

On his part, Chief Patrick Ilozumba said that this is truly the time for young men to go get things done. “I am happy with your aspiration. I have been hearing about you. We are paying close attention to developments. I am in APGA; we are in APGA, and we know what you can do. Therefore, you did not take any wrong step to aspire to go to senate”, Hon. Ilozumba concluded.