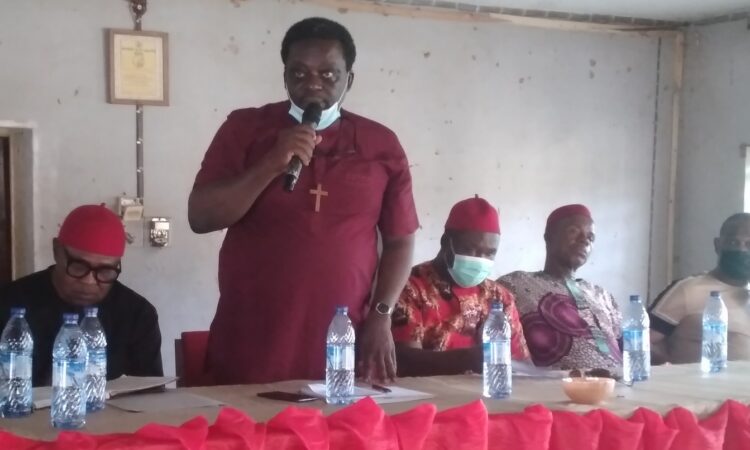 The umbrella association of Anambra North Senatorial zone, Anambra North People’s Assembly- ANPA, which membership is made up of the seven local governments in the zone, has declared its resolve to support a credible candidate from Anambra South Senatorial zone. Arising from its executive meeting today, at Awkuzu in Oyi Local Government Area of Anambra state, the association also is set to ensure that a comprehensive short term, long term and midterm development plan for the zone is crafted.

Anambra North People’s Assembly was formed in 2009 with its inaugural meeting held at Bishop Anikwenwa’s home in Awkuzu, Oyi local government Area. The group which then championed power shift to Anambra north, was able to just before the election of former governor Peter Obi for his second term in office, secure his assurance and signature that he (Peter Obi) will do all in his power to ensure that power moves to Anambra north. This, accordingly, Peter Obi fulfilled when he, along others ensured that governor Obiano, from Aguleri in Anambra East local government in Anambra north, was in 2014 elected governor of Anambra state and reelected in 2017 for second term in office. 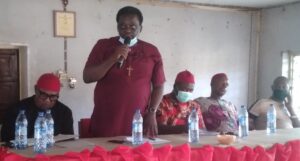 Hon. Somto Udeze, Chairman of the Association addressing the meeting

In his opening remarks, the Chairman of the association, Hon. Sir. Somto Udeze, who is also the member representing Ogbaru 11 constituency in Anambra Assembly, emphasized the need for the group to function beyond politics. He also reiterated that the people of Anambra north ought to demonstrate their support to Anambra south, in the spirit of fairness and solidarity. “The essence of this meeting is to reason together. After a lot of consultation with our leaders and stakeholders, it is apparent that apart from politics, there should be other things that ought to hold Anambra north together. We need to think of development plan for Anambra north”, Hon. Somto said. He also reminded other members of the executive and stakeholders in attendance that in about seven months, the zone will no longer be in charge of the state governance, while also asking that the zone look at political blocs like Nnewi, and Aguata in Anambra south zone to learn some lessons in community development, unity of purpose and organization. “In about seven months, Anambra north will no longer be in charge of Anambra’s governance. In Nnewi and Aguata, we see formidable blocs that we have to look at and learn one or two lessons. It is not only government that develops the society. Wealthy and influential members of the society also help to develop the society”. Hon. Somto Udeze has said. 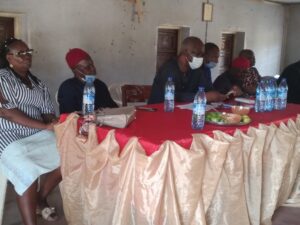 Dr. Alex Obiogbolu and others at the table

Commenting on the coming governorship election in Anambra state, Hon. Udeze without equivocation observed that the group has a huge task before it. “We have a job before us. We have to show solidarity. I believe it is our duty to support a Southern candidate to become the next governor of Anambra state”, he concluded.

Those in attendance include Hon. Chief Udoji Amedu, who, speaking in support of Hon. Udeze’s position espoused that “before the election, Anambra north will take a stand irrespective of party”. Dr. Alex Obiogbolu, a respected statesman, spoke extensively on the vision behind the group. He however regretted that the group’s efforts which eventually paved way for a governor of Anambra north extraction, is, as if it is a wasted effort. In his words, “what I want to say is to plead with us. Although, it is as if we gained nothing from our own brother who is governor. Look at our roads for instance, throughout Anambra north, it is the same thing. Many of our roads were abandoned where the past administration left them unfinished. However, we gained unity, and unity is strength. The lesson is that we have been able to build unity of purpose from that experience. Therefore, our efforts were not in vain”, Dr. Obiogbolu enthused.  On his part, Chief Osy Ilozue, noted that if it was left to political contestation, Anambra north would never have had a chance to produce a governor because of obvious political realities. Generally, these views perfectly fitted into the desires and aspirations of other leaders of Anambra north in attendance. Hon. Douglas Egbuna, who is a stakeholder of the association, and the member representing Onitsha North 1 in Anambra State House of Assembly, also expressed the same views.

Before the meeting came to an end after due deliberation, the candidate of the Accord Party, Dr. Godwin Maduka stopped by to felicitate with the association. According to Dr. Maduka, he was on his way to Onitsha when one of his supporters informed him of the meeting and he decided to in his words, “crash the party”. That is to say that he came uninvited, as can be seen in the expression of surprise by the leaders of the association. However, he was granted audience and within a few minutes, he attempted to say what he will do if he become governor. Among many other things, Dr. Maduka said that he came to fix Anambra. “I came to fix Anambra, I am here to change the narrative. Under my watch, education will be free from primary to secondary level”. He also declared that he will conduct local government election. “I will conduct local government election within my first six months in office”, Dr. Maduka said. 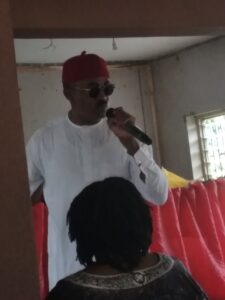 Dr. Godwin Maduka speaking at meeting, after he came uninvited and was granted audience

The ANPA expanded executive meeting came to an end after the association has done due diligence to its agenda and an agreement reached that the association will hold an extensive general meeting in September, which will include all its stakeholders and members. It is in this September meeting that they intend to take a stand based on the expressed wishes of the people of Anambra north, regards November 6 gubernatorial election in Anambra state.