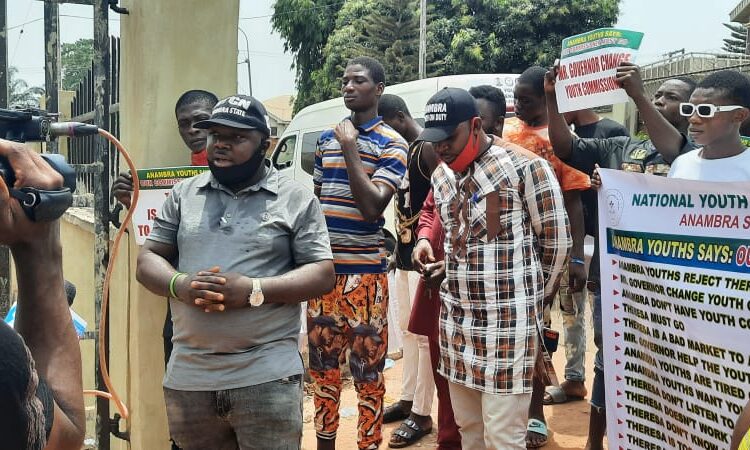 Anambra state youths under the auspices of National Youth Council of Nigeria Anambra State Chapter, today protested against the Anambra State Commissioner for Youths, Prof. Theresa Obiekezie and also pleaded with the governor of Anambra state to relieve her of her job.

Prof. Obiekezie was formerly the Commissioner for Tertiary Education before she was redeployed to the Ministry of youths, following a minor reshuffle of his cabinet by governor Willie Obiano, less than a year ago. The protest led by the Deputy Chairman of the National Youth Council of Nigeria, Anambra state, equally featured other executive members of the Youth Council and so many youths belonging to other youth organizations.

According to the protesting youths, Theresa Obiekezie has been ignoring them for so long and would not even talk to them when they go to her office. Most times she would simply refer them to the permanent secretary, but at other times, she simply dismissed them claiming she is not chanced to see them. They also complained that she is never willing, ready or chanced to attend any event organized by youths in the state and sometimes, go as far as issuing instruction to her staff that they should not attend Youth Council’s events. These, they said they have put up with for a very long time and could no longer take it. “She is not ready for the job. She feels too big to even talk to us”, one of the protesters said angrily. The youths further accused her of not having any plan for Anambra youths and therefore they strongly suspect she is generally unfit for the job. That was the background upon which they now pleaded with the governor to sack her.

During the protest which took place at the Anambra state Ministry of Youth, the Commissioner came out to address the protesting youths but they echoed “it is too late”, continued with their protest, with none of them showing any iota of interest in what the Commissioner has to say.

After the protest in which they plainly asked the governor to sack her, they also promised that they will not let this slide until she is relieved of her duty; this, they made clear before they dispersed peacefully.

As of the time of filling this report, efforts to reach Prof. Theresa to ascertain the accuracy of accusations against her by Anambra youths, proved abortive.

Prof. Theresa, Commissioner for Youths, trying to address the youths but was ignored