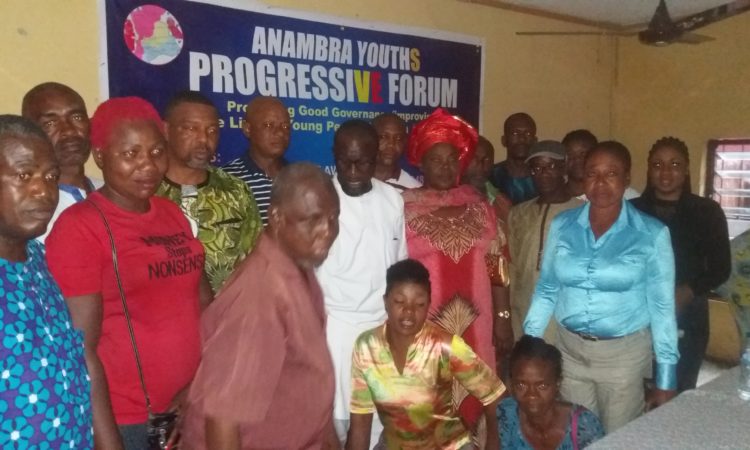 Anambra Youth Progressive Forum, a duly registered Non Governmental Organization on Saturday 19th October, 2019, held an advocacy event that focused on the dangerous impact of drug abuse among youths, capacity building of young people, employ-ability, human trafficking, among other others.

The event which was attended by over 50 persons was held at Umuogbunu village hall in Awka, Awka South Local Government Anambra state and lasted for about four hours. Comrade Chilka Nwosu, the founder of the Forum, then opened the floor with an opening remark in which he noted that the Forum is driven by passion for the wellness of young people. According to him, the challenges facing young people are enormous and can prove disastrous for the society if we all keep to our safety corners. The need for all of us to play our respective roles, he said, is important to better our society, instead of the traditional approach of blaming the government. The representatives of the State Director of National Drug Law Enforcement Agency-NDLEA; Mr. Chris Adebo and Mr. Silas Omobude, both of whom spoke extensively on the dangerous and devastating impact of drug abuse on young people at their young age and much later in life, at an older age. 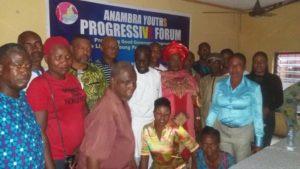 Going further, Lady Mrs. Kate Alex, a retired Civil Servant from the Ministry of Education spoke at length on human trafficking and the dangers that attend to it, especially as many young people continue to fall victim to too good to be true stories of heaven on earth outside the shores of the country. According to her, young people must be determined to work hard and make a living through verifiable legitimate means. On his part, Chief Anayo Obiozor, who is the Chairman of Umudioka Youths and an Ambassador of Awka, spoke passionately about the condition of young people in our society today. He berated the government for lack of plans for young people. According to him, if government was serious and as much as invest in sports development, that alone can take a few thousands of young people off the streets. He also blamed the youths many of whom he said have no plan at all for themselves and resort to drug abuse which he noted has become common place in Awka, to this he called the NDLEA to the needful to restore sanity.

For Rev. Dr. Chukwukodinaka Oragu, young people needs to be focused and determined to make an impact. He went further to commend the organizers of the event and encouraged them to keep the good work going.

Other speakers include; Barr. Uchenna Nwude and Mr. Ebuka Onyekwelu. On his part, Barr. Nwude noted that some deviant behaviours of young people can earn them very long years in jail and therefore completely alter the cause of their lives forever. For Ebuka Onyekwelu, the problem of unemployment to which many young people are victims, is further complicated by the simple fact that many youths seeking employment may have the academic background, but lack the requisite skills to do the job to which they apply. To this therefore, young people must take self development more seriously. He also decried the rise of get rich at all cost, which has become common place today, he then emphasized the need for youths to pay attention to details and process and not try to jump process at all cost.

The event came to an end at about 4:30pm, after a closing remark by Comrade Chika Nwosu, and an opening prayer by Rev. Oragu, which was followed by group photographs.