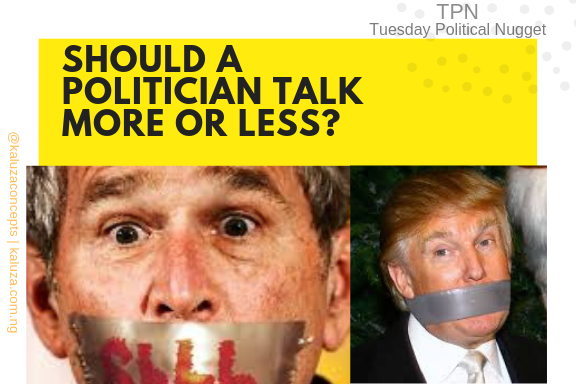 Many times, politicians always feel the need to impress people. They always want to please as many people as possible by what they do, what they say and how. In all, one question has continued to resonate. Is it better for a politician; either seeking election into public office or already serving as an elected public officer, or maybe serving as an appointee or one expecting an appointment, to talk more or talk less?

To be sure, if we are to answer this question safely, the best answer is to say that it depends. Yes indeed, it depends on so many factors including the personality of the politician in question. Also the nature of the office he seeks, etc. But, this is politics, there is no middle point. You are either proposing or opposing. Sitting on the fence is a ploy to divert attention, while maintaining constant loyalty with one’s core intent and purpose, or one’s own side of truth.

Generally, the need to impress people is basically the major reason politicians struggle to strike a balance between their personality/core believes and public expectation. Considering the case in point, careful observation reveals that people accuse politicians of talking too much or not talking enough. Some are accused of not talking at all. Basically, either way, you are still accused.

But does talking more or less facilitate political capital? To be clear, the way a politician talks endears people to him. Politicians gain prominence for their oratorical skills which I believe is a gift of nature or learned. The challenge however, is that not many people are given to skillful oratory, although they can always learn but to what end?

Now here it is. Talking more can earn you quick political capital and suddenly, erase it. No matter how good a talker you are, you cannot say the right things all of the time. So you may say all the right things at point A and then move to point B and say contrary thing. You can say all the good things to impress a group but then offend the other people. But on the other hand, talking less may not earn you any quick capital but it will earn you admiration and it stays. It takes off all needless attention from you. Not many people will follow up with what you do because there is often no story surrounding your public appearance. Then again, talking more makes politicians especially office seekers, make promises that have no policy backing, which they end up not implementing. Those who applaud him then often later become his enemies when he fails to fulfill those promises. 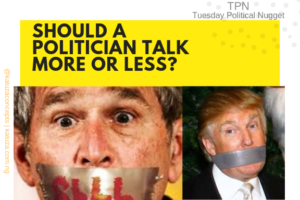 When we weight the two properly, each has its own gains, but talking less appears to have less damage than talking more. It is often said, nobody holds you to account for what you didn’t say and truly, nobody makes you an enemy because you didn’t say something. Instead, once you say something, you cannot take it back and what has been said goes out to people who are bound to analyse every word of what was said. Sometimes, you are so mesmerized with what is said to have been said by you, that you are so afraid of people.

But, whatever works for you, keep it going. Just be very sure. However, you can always do without talking too much as a politician. In actual fact, it is my considered view that better to talk less than talk more. There are so many more reasons for this. Always go straight to the point. Always focus on the issue at hand, make your point and end it there. Talking less earns you more political capital, especially with time, than talking more.