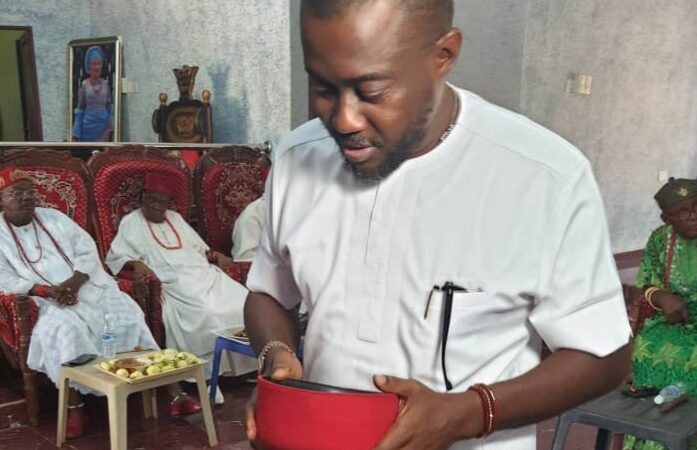 Forum of ndi Eze and Igwe in Anambra Central Gives Total Support to Uzu Okagbue
The council of all Traditional Rulers in Anambra Central Senatorial zone, today gave total support to the aspiration of Uzuegbuna Okagbue, to represent the zone in the 10th Senate.
Uzuegbuna Okagbue, the APGA leading aspirant for Anambra Central top job at the National Assembly, was commissioned by all the Traditional Rulers of the Senatorial zone when they not only endorsed his aspiration, but also pledged to give all the support they can to ensure he wins. 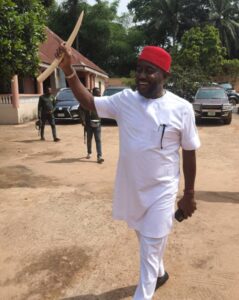 Uzu acknowledging cheers at the venue

The Chairman of the Forum, Igwe C.N Okpala, Ezenebo III of Akwaeze, spoke highly of Uzu as a competent and trusted hand that deserves to serve at the senate. Describing the journey as a beautiful one, he proclaimed that Uzu will go to senate. “Our son, your journey is beautiful. You will go to senate. But don’t forget us tomorrow”, Igwe Akwaeze said in his brief introductory remarks.
In his speech, Uzu said he came to present himself to his fathers to take advice, considering that he has no father as his late father died since 2004. The Igwes of Anambra Central were therefore his father. “I have come to take counsel from you my fathers and also ask for support for this journey. If I am found worthy for the journey by you my fathers, then, your prayer and support will surely take us to the senate”, Uzu said. Although in his further comments, Uzu assured the Royal Fathers that he is the one who desired to serve and run for senate and that he is prepared to run a full course. “I am not in the race to try; I am in the race to win”, Uzuegbuna Okagbue said, to the approval of ndi Igwe.
Reacting after the speech by Uzuegbuna Okagbue, Igwe Urum, Igwe B. O. Nweke (Ezeugboyimba) said that he knows Uzu and is confident in his capacity. “I know your father. I have never seen a good man like him. You are just like your father. It shall be well with you. My own support will be double of other people’s support”. On his part, Igwe G. Okaa-Onwuogu (Ezeoraorachi na Nogu) described Uzu as a hardworking and diligent man. “Uzu is a diligent young man, savvy and wise. Look at what he did today. He will get to the senate”. Next to speak was the Eze of Uke, Igwe C. C Agbala. For him, “Uzu we know you well. We thank you for coming. It shall be well with you. When you get there, know that you are from Anambra Central and that you are an Igbo man. We want you to represent us well, we know you have the qualities”. 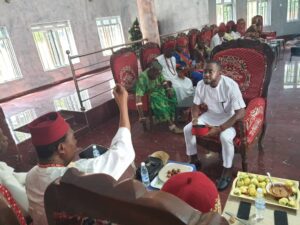 Igwe Ogene confering the mantle of authority on Uzuegbuna Okagbue

The last to speak and confer the blessing and traditional authority of support on Uzu was Igwe Ogene of Okpuno, HRM Igwe Engr. S. I. Okafor who is the Deputy Chairman of the forum of Anambra Central Traditional Rulers. “Uzu, you were diligent throughout your time with Governor Obiano. You shall live long. We want young men in power. Uzu has energy and he is teachable. Uzu, you are our great son. What you are preparing for, you are going already. We hereby give you the traditional mantle of authority and God is with you. You will go to the senate”, Igwe Ogene declared to the resounding approval of all Traditional Rulers.
The Forum of Anambra Central Traditional Rulers has a total of 46 members, out of which about 23 were present. The Chairman of the forum Igwe Akwaeze had said that even those who did not come for unavoidable reasons are in total support of the forum’s stand, decision and support for Uzuegbuna Okagbue’s aspiration to the Senate.