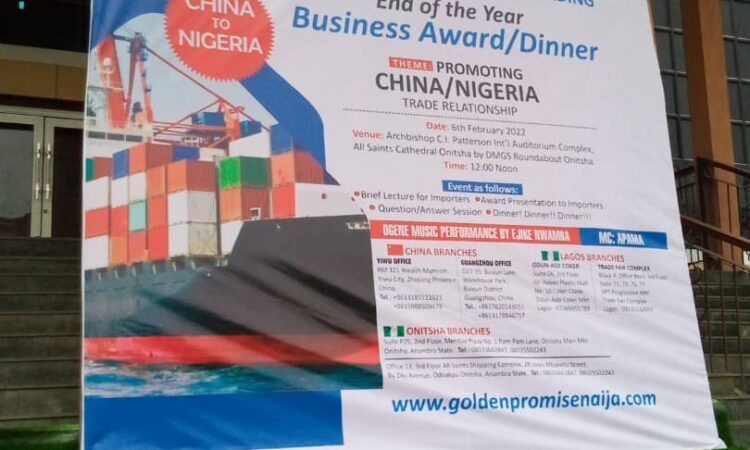 Golden Promise, a fully registered Nigerian company that specializes in shipping, clearing and trading, today held its event aimed at promoting China-Nigeria business relationship. The event held at the Archbishop C. I. Patterson International Auditorium at the All Saints Cathedral Onitsha, Anambra State and was well attended. Leadership or representatives of different Chambers of Commerce within Anambra and elsewhere were also present.

No fewer than about a hundred businessmen and women who are either into importation or interested in any kind of importation from China, were in attendance. A foremost businessman and first-rate industrialist of impeccable repute, Chief Emma Bishop Okonkwo, the Chairman of Ekulo Group was at the event and described Mr. Stephen Chibuike, the Managing Director of Golden Promise as a man of the future who in the coming years will become the face of business and a role model for the upcoming generation of businessmen and women. Also in attendance was the Director General of National Productivity Centre, Abuja who presented a brief lecture on importation and business relationship between Nigeria and China.

Lawyer and former lawmaker, Rt.Hon. Benchuks Nwosu spoke to the audience on technical and important angle to importation and exportation to China and how Golden Promise comes in as a middleman in the process to bridge language and other huddles facing Nigerian businessmen and women who import or intend to import from China.

High point of the event was the recognition and honour given to customers and business associates of Golden Promise. Many of them went home with assorted gift items distributed by host to them, in appreciation. Similarly, some outstanding businessmen and associates of Golden Promise were honoured with an award of excellence. Meanwhile, questions relating to importation and other business concerns were answered to satisfaction of participants.