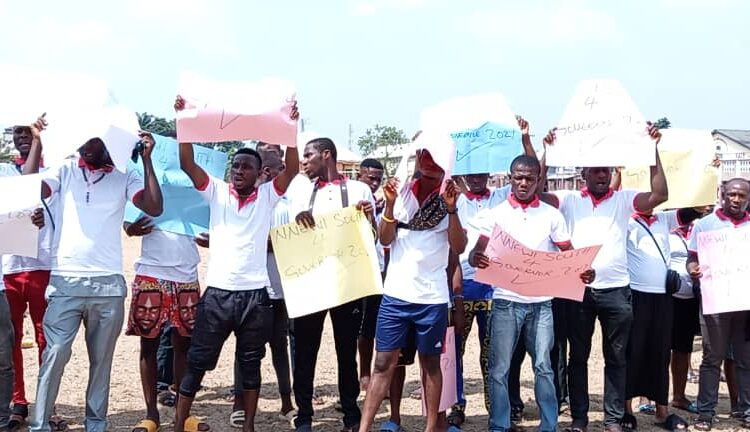 A group, Anambra South for Better Tomorrow in association with youth organizations and the All Progressives Grand Alliance –APGA- youth arm in Nnewi South and Anambra South, yesterday held an awareness exercise where they also asked the Governor of Anambra State and the leadership of the APGA to avail someone from Nnewi South the opportunity to succeed governor Obiano whose tenure of office will elapse in exactly one year, one month and six days.

The event which was held at St. Mary’s Catholic Church field in Ukpor, Nnewi South, in form of a rally, was extremely well attended with representatives of several youth organizations throughout Anambra South senatorial zone. Already, the APGA which is the ruling party in Anambra has zoned the governorship to Anambra South senatorial zone in keeping with the gentleman’s agreement on rotation in Anambra state. But in Anambra South, there are seven local governments and all the local governments have governorship aspirants. Although, the tempo is building up ahead of the November gubernatorial election in Anambra state, however, nobody is as yet sure or in the least has an appreciable degree of certitude as regards who may likely become the next governor of Anambra state.

Hon. Emeka Aniehobi who coordinated these groups expressed confidence in the fact that Nnewi South local government has enough capable hands to succeed Obiano and ask that the party and the governor should look to their direction. “In Anambra state, Nnewi South is a peaceful local government and during elections, we always support the government with everything we have, so now, the governorship is coming to Anambra South, we said, well, we haven’t had this kind of opportunity before. So we think that it is something we are qualified to ask for”, Emeka said. He recalled how the local government has produced several commissioners, including Chief Maja Umeh, Hon. Okoli Akirika, Hon. Joshua Mkparu, Hon. Ifedi Okwenna, among others, who served the government in various capacities without any iota of betrayal. “They all went there peacefully and served and returned back in peace”. Currently, the local government has Hon. Greg Obi as a commissioner who has served in various formidable capacities and has shown to be a loyal party man. “Everybody knows the importance of the strategic offices that our brother Hon. Greg Obi has so far occupied in Anambra state and in all; he is doing well without disturbing the peace. So you can see that we have capable people who can be governor and we are only asking that governor Obiano and the APGA should look in our direction”, Hon. Emeka said.

It is yet unclear just exactly the direction governor Obiano is going with regards to who may take over from him. However, pitching his tent and giving support to one of his trusted aides who has served the government well and who is from Anambra South zone, has been on the front burner as basis for sustainability in governance. For Hon. Emeka, “Nnewi South can do the job. We don’t really have anybody at heart. There are so many people. We have Hon. Greg Obi who is also serving the government and we know that he can do the job. We are simply asking that the governor should look at our direction, we can get the job done”, he said.