There is growing apprehension over increased level of insecurity across Anambra state. With reports of dispossessions by armed gangs, and kidnap, the once acclaimed safest state in Nigeria may be reversing to the old days when criminals operated with impunity and openly; days when criminals took pride in committing crime.

Although Nigeria is currently having one of its worst security challenges ever, with heavily armed gangs traversing the length and breathe of the country and causing mayhem. Gangs suspected to be Fulani herdsmen have become source of trepidation to road users in different parts of northern Nigeria and also in southern Nigeria. Recently, there have been clashes involving Hausa/Fulani and Yoruba ethnic groups in southwest part of Nigeria leading to the death of a handful of persons. The Fulani group about three days ago went on revenge, burning houses, injuring some people and killing a few in a village in Oyo state. As it is now, the situation in southwest Nigeria especially in Oyo state, has conveniently taken ethnic colouration and thereby breeding tension of delicate character. Indeed, one of which if proper care is not taken in the manner it is handled, may very easily slip into widespread ethnic clashes and retaliatory attacks in most part of the country. In the mean time, bandits and armed criminals are on the loose terrorizing citizens, much, it appears, to the helplessness of the state and its apparatuses of law enforcement.

In Anambra state, the situation is fast degenerating as armed gangs freely move about committing crime. About three days ago, it was reported that a traditional ruler in Nnewi was kidnapped, on his way back from nearby Oraifite, where he went for a condolence visit. Around Onitsha, traffic robbers are on the loose, robbing people freely especially at night and forcing them to path ways with their belongings, amid dehumanizing intimidation and helplessness on the side of the victims. “The issue is that anywhere that is not an estate in Onitsha at night, is not safe. Express roads like upper iweka is not safe”, said Ebele, Onitsha based businessman in an interview with our reporter. So many reports of incredible criminality going on in Onitsha abound. According to ST, “In Onitsha now, once you are on the road till 8pm or 9 pm, you are on your own. The worst is that they use keke to rob. You enter keke they use a gun to force you to drop your possessions. In the day, they use keke to enter street and rob, yet nobody talks, everybody is afraid, in broad day light they use keke to rob. Imagine keke, something that doesn’t even move fast. They enter street and rob peacefully and then go. We are getting use to it. The worst is that most times they collect people’s belongings and still give them cut on the head, with knife. Around 4pm or 5pm, you will see okada moving freely in Onitsha, they use okada to rob people. I thought they have banned okada in Onitsha. Last two weeks, they entered our street, one woman doing POS, they entered with keke and robbed her, robbed the bet shop belonging to the woman and last week again, the same people came and also robbed in the same street. Nobody is talking and we have vigilante in our street, it is terrible”, recounted ST, resident of Onitsha and a businessman based in Onitsha.

In Nnewi,a major commercial city in Anambra state, there are reports of armed gangs using tinted vehicles to rob, with one of them in army camouflage. This makes victims assume they are on escort duty. “I was riding on my bike around Queen of Heaven between Umudim and Amichi, going to Ekwulummili, I passed this tinted Lexus car. They later came and double crossed me. The Passenger on the front seat was dressed in army uniform and wearing sunshade. The driver was putting on face mask. They said I was looking at their car. I was like how, they said the way I look at their car, that I look like an informant. I said I am not. So I showed them my ID. They said they are Nigerian Army officers hiding in the bush and that I inform youths and ESN to attack them. It was around 6pm. I never knew it was a disguise. They said I should give them my key, I gave them my key. When I got close, I saw their arms. They left with my bike worth around N350, 000. They said I should come to their office located close to Otolo police station, in Nnewi. I called my brother who is a lawyer and he called the police and the police confirmed that those are criminals and that is their new mode of operation around Nnewi axis and even till around Awka-Etiti”. This is an account of a medical practitioner based in Nnewi, narrated exclusively to us. The robbery happened on Saturday, February 13. 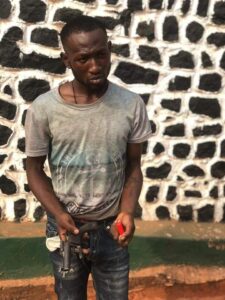 But for Awka the state capital, there is relative calm and no remarkable breach of order by criminal gangs. Though in the past weeks, there have been several arrests of armed boys in keke at various points within the city. However, the security situation across the state is depreciating and only getting worse by the day. The government and security agents must rise to occasion before the growing insecurity leads to extensive breakdown of law and order, which creates perfect condition for free operation by criminals, while traumatized citizens look on, in utter vulnerability.