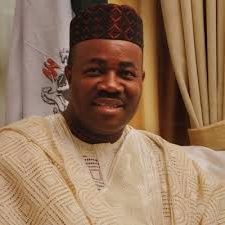 The former Governor of Akwa Ibom State and Senator representing Akwa Ibom Northwest in the Senate, has told an Abuja Federal High Court that he did not decamp to APC from PDP, but merely stepped into APC from PDP.

Akpabio, a two time Governor of Akwa Ibom under PDP, whose transformation of the state earned him the title of uncommon transformer,  and a senator elected on PDP platform in 2015, as well as the Minority Leader of the senate, defected to APC in the heat of the build up to 2019 General Election, to the chagrin of many who called it uncommon defection.

An advocacy group; Legal Defense and Assistance Project- LEDAP, had dragged the senator and other defecting lawmakers, to court to demand that the senator refund all his salaries and emoluments considering that he has betrayed his mandate by his uncommon defection. In a rather swift move, Akpabio applied and pleaded with the court that he was not duly informed as he only read of the suit in newspapers. That he was not served and that the Clerk of the National Assembly did not inform him of any such suit so that he can get a lawyer to defend himself. He however noted in his application that he did not decamp from PDP to APC, but rather, moved from PDP to APC when the PDP has become flooded. The Presiding Judge Justice Okon Abang, considered his application favorably.

Sen. Godswill Akpabio who looked physically troubled at the court premises yesterday, upon defection to PDP, contested albeit unsuccessfully to return to the senate as he was defeated by Engr. Christopher Ekpeyong of PDP, which made it the very first time he {Akpabio} is loosing an election in Akwa Ibom and for a persona of his immediate past standing in the politics of Akwa Ibom state, it was a failure too many, as his battle with his formerly hand picked successor; Governor Udom Emmanuel ragged, apparently the outcome of the 2019 General Election in Akwa Ibom state has reduced Akpabio to the position of mere mortal in Akwa Ibom state politics.