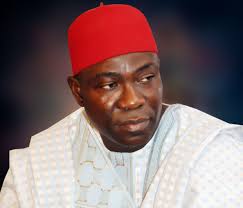 The Nigeria’s Deputy Senate President, Sen. Ike Ekweremadu, representing Enugu West Senatorial zone, has announced his intention to quit Nigerian Senate in 2023, after serving for the next four years which will total his years in the Senate to 20 years. Sen. Ekweremadu who said this during his 57th birthday celebration organized by friends and attended by close associates including the Governor of Enugu state among many other dignitaries, ceased the opportunity to roll out his achievements in the senate in almost sixteen years he has served his people.

In his remarks, the senator noted that he has been able to do a lot by way of attracting different projects and other developmental needs of his constituents in the last years and also he is still working hard to do more for his people over the next four years.

“Our road infrastructure has improved remarkably. The Awka-Ugwuoba-Oji River-Nachi-Udi-9th Mile-Abor-Ukehe-Opi Road, which is our latest intervention in this regard, has just been awarded.

Going further, he remarked that “We have made progress in electricity and water supply to our various communities. We have built, rebuilt, and we are still building and rebuilding schools, churches, health and civic centres, among others.

“Our human capital development projects are on the upward trajectory. We have assisted several of our young people with employment in public service. Through the Ikeoha Foundation, we have supported 3,843 undergraduates with bursary awards, 87 with full scholarship, while over 12,155 women and youth have received basic education courtesy of Ikeoha Foundation Adult Literacy Programme”,

“However, my dear brothers and sisters, you must admit that no matter how melodious a song may be, it will definitely have an end. Therefore, as I thank you for these 16 memorable and splendid years as a Senator of the Federal Republic of Nigeria; as I thank my distinguished colleagues for honouring me as the Deputy President of the Senate for three consecutive times; as we recall the accomplishments of the projects of my representation in the last 16 years; as I acknowledge your kindness in keeping me in the Senate for these 16 years; and as I prepare to further represent you by your mandate for the next four years, let me seek your understanding and indulgence to now announce that this will be my last term as your Senator.

“As we get set for the 9th Senate, be assured that I will focus on the completion of all ongoing projects we attracted and ensure that communities that are yet to benefit from our vision in infrastructure adequately benefit.

“I will work with other patriotic Nigerians within and outside the National Assembly and across party, ethnic, and religious lines to address issues of disunity, insecurity, and poverty currently threatening our nation. I believe that together we can pioneer a new order characterised by peace, justice, unity, prosperity, egalitarianism, and boundless opportunities for all”, the distinguished Senator said.

Next month, Sen. Ekweremadu will be sworn-in for the fifth time in which he has been Deputy Senate President for three terms of 12 years. However, even as he plans to quit the Senate in 2023, it is not clear if he will altogether quit politics after serving out the next four years in the 9th senate.