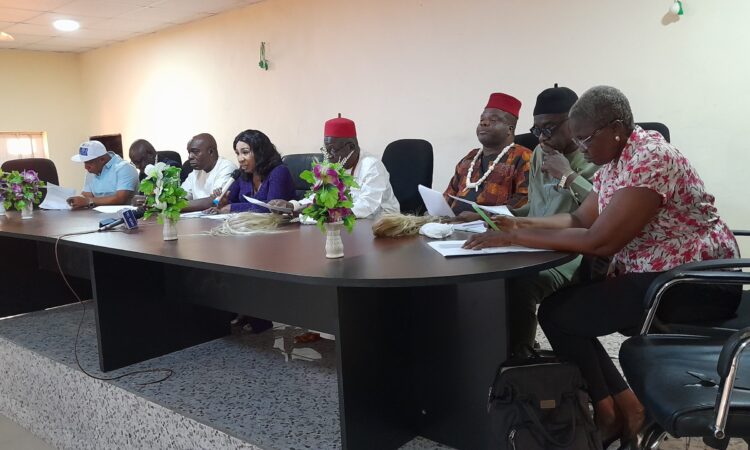 The Independent National Electoral Commission – INEC, Anambra State, has convened a meeting of critical stakeholders across the state, in preparation for the 2023 General Election. The meeting which was held within the premises of INEC head office in Awka the state capital on Wednesday, was attended by the media community, traditional rulers, transport union leadership, town union leaders, civil society organizations, political parties and the Electoral Officers- EOs, of the twenty-one local government areas of Anambra State. Also in attendance were Anambra State Commissioner for Transport, Mrs. Pat Igwebuike, the Director of National Orientation Agency – NOA, Barr. Charles Nwoji, and his counterpart with the Independent Corrupt Practices and other related offences Commission – ICPC, Godwin Ochie. The meeting was chaired by the INEC Resident Electoral Commissioner – REC, Dr. Queen Elizabeth Agwu, who was recently deployed, by the Commission as Anambra State REC. INEC’s Public Affairs Officer – PAO, Kingsley Agu, PhD, was in attendance, as well as other senior INEC staff members in Anambra State.

In her opening remarks, Dr. Agwu said that she is determined to carry everyone along, knowing that there is no way she can do it alone because that would not be leadership, but ruler ship. “Leaders don’t work alone. In Anambra State, I do not want to work alone. I want to work with all of us”, she said.

In their reports, the twenty one local government area EOs, took turns to provide figures of unclaimed PVCs in their various local governments which totaled to one hundred and thirty-two thousand, six hundred and seventy three unclaimed PVCs, with Onitsha South LGA and Aguata LGA topping the chat with over twelve thousand unclaimed PVCs, each. In shock, the participating stakeholders wondered how the problem can be addressed. They also emphasized that having a preferred candidate is not enough because, a voter must need his PVC to cast his or her vote on Election Day. Igwe Enugwu-Ukwu, HRH Igwe Ralph Ekpeh, assured that he would be swinging into full action to ensure that the over seven thousand unclaimed PVCs in Njikoka is collected to the very last.

Other issues of concern pertaining to the 2023 General Election in Anambra State include relocation of some Collation Centres, Registration Area Centres- RACs and Super RACs. Some of the reasons given for this relocation are insecurity, dilapidated structures, among others. Some LGAs with affected RACS and Super RACS include, Ihiala, Nnewi South, Onitsha North, Orumba North, Awka North and Awka South local governments.

The REC also announced that INEC has commenced distribution of non-sensitive material to States and that in the State; they are equally ready to move those materials to local governments. “A proactive arrangement is already in place for a hitch-free distribution and deployment of election officials and materials to our various local government area offices”, Dr. Queen Agwu assured.