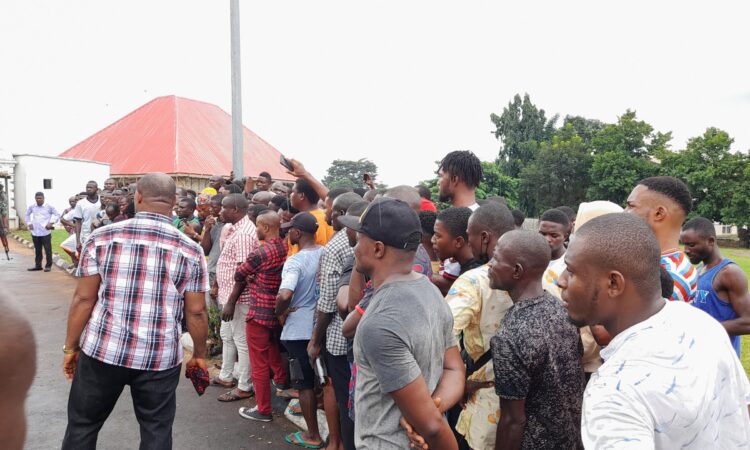 Keke and Shuttle Operators’ Protest in Awka: Weighing the New Tax Regime Against Facts and Fictions

Yesterday, the new Anambra government led by Prof. Charles Soludo recorded the first public disapproval of the government’s policy on taxation in the informal sector by keke operators in the state capital. Today, shuttle bus operators are protesting on the same matter. Before now, tax collection in many sections of the informal sector particularly in the various segments of the transportation sector, is contracted to tax agents approved by the state government under a defined contract terms and conditions. But those terms are often flouted by the contractors usually without consequences because of political patronage. The implication is that the state has so little in its coffers as Internally Generated Revenue – IGR, despite the huge potentials.

Upon assumption of office, Governor Soludo then suspended collection of taxes by these contractors. But our investigation shows that much of those taxes were still being paid even at the time of this report, three months after it was stopped by the governor, with the government getting absolutely zero Naira throughout the time. Now, the government has introduced a new tax regime with digitization of the tax process, which intends to among others things; eliminate double or multiple taxation, increase IGR as all monies will be paid into government coffers directly, and possibly cut down the amount of taxes paid by operators, to legitimate and illegitimate revenue collectors, in the past tax regime.

However, protest by Keke and shuttle bus operators in Awka the Anambra State capital, left more to be desired. Keke operators have been asked to pay a total of N15, 000, as their monthly tax. While shuttle bus operators were asked to pay N25, 000 as their monthly tax. Their protest is based on alleged over taxation in the new regime. So how much really were they paying before? Do they make enough money to pay those amounts?

Logic suggests that if keke and shuttle bus operators were demanded to pay less than they paid before, it is doubtful that they will be out protesting. If the new order saves money for them, they will not kick against it except where the new policy has not been well explained to them. However, an investigation by Ebuka Onyekwelu shows that in Awka, there are about four categories of Keke operators paying four different categories of taxes in the old tax system. Some keke operators in parts of Awka, do not pay a dime as tax. That is to say that they operate free of charge, daily, monthly, yearly, without any form of taxation. The next category operating around town, pay N500 daily for ticket (tax) in the contractor system. The third category operating around Eke-Awka, pay N450, daily. The fourth and final category pays N1, 500 daily or just N500 to operate only in the evening from 5pm; they operate around Aroma-Ifite and terminates at Book Foundation in Ifite/Agu-Awka.

For shuttle bus operators, they pay N300 per day, for those operating within town, after they have registered with their union.

Interestingly, all operators ‘pay as they go’ in the old regime; which is to say that they pay only on the day they are working. But the new regime requires them to pay upfront.

The new tax policy demands that all keke operators pay the sum of N15, 000 per month, while shuttle bus operators pay the sum of N25, 000 per month. For keke operators around Eke-Awka, when N450 is multiplied by 30 days in a month, the total is N13, 500. What it means is that even if they work all day in a month, including Sundays, under the former tax regime, they were paying less than the current N15, 000. Those paying N500 in the previous regime for 30 days totals N15, 000, which is same as the new regime. Yet, it can be said that they are required to pay more now considering that the calculation includes Sundays and other days they may not be disposed to work; like when they are fixing their keke or have other needs to attend to and therefore could not work for a day or more. Whether they are working or not, they have already paid their taxes in full. This does not seem to sit well with clear realities among keke and bus operators, hence their protest. The only ones benefiting out rightly from the new payment regime are those paying N1, 500 per day in the previous regime. They will now pay N15, 000 instead of N45, 000 per month. For shuttle bus operators, when you multiply N300 by 30 days, what you have is N9, 000 in the old tax regime as against the current N25, 000. Like keke operators in the old tax system, shuttle bus operators also do not have a singular tax in the same Awka. It depends on route.

In any case, the fact is that there is clear imbalance and basis for legitimate concerns. But also it should be noted that those not paying at all before, will not want to pay. People are mostly averse to paying their taxes in Nigeria and they insist that there is no need, especially as they are struggling to meet their basic needs and also because government cannot be trusted.

From the foregoing, Anambra State government must build confidence of the governed in their government. The government must carefully map the routes and consider decentralization of the amount due for payment for operators in different areas, based on economic considerations in tandem with obtained reality. For instance, Aroma to Ifite has high flow of passengers throughout the day because of the university community in Ifite, perhaps, that is why they pay more. Secondly, government must invest in enlightening the paying public on the advantages of the new tax regime and how it benefits the operators.