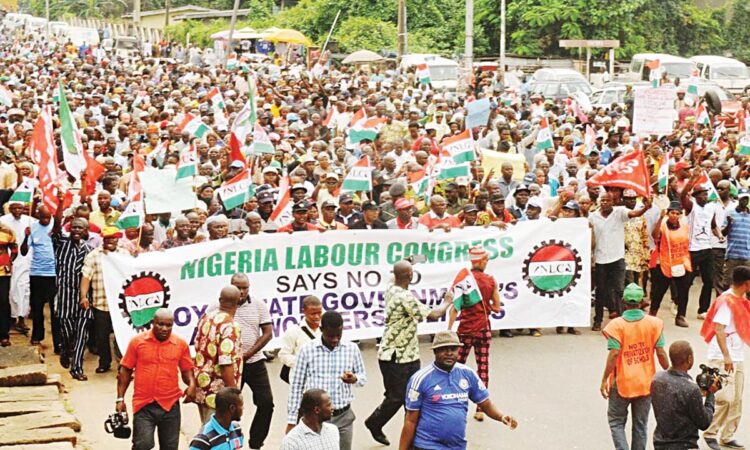 Making Sense of the Regular Strike Action by Nigerian Workers

News of strike action by the Academic Staff Union of Universities –ASUU- is often received in many quarters with straight up blame on ASUU for always going on strike for salary increase. Many other people blamed the government for failing to manage the needs of it workers thereby forcing them to go on strike. In fact, ASUU has become so synonymous with strike that today, it is almost impossible to go through university education in Nigeria without experiencing ASUU strike at least once, before graduation. In 2018 during one of these numerous strike actions by ASUU, the Union Chairman maintained that the government has continued to shift the goal post in the middle of the game by attempting to renegotiate an agreement it signed with the Union in 2013. Worst still, the said agreement in which the government pledged to release about two hundred and twenty billion for improvement on the infrastructural needs of Nigerian universities’ in 2017, was completely ignored and altogether abandoned. Instead, more than one year later, the Federal Government then pledged to release a total of twenty billion, instead of the agreed two hundred and twenty billion. This was and still the issue, only that recently, it was exacerbated by the vexatious introduction, nay, imposition of the Integrated Payroll and Personal Information System –IPPIS- on the university system, by the Federal Government. As alternative, ASUU made a case to substitute IPPIS with their own developed University Accountability and Transparency Solution –UTAS – now said to be ready for integrity test, which will also provide the same technological based accountability solutions in payroll at public universities.

Issues with the imposition of IPPIS are as follows. First, the imposition of IPPIS on public universities contravenes the Universities Miscellaneous Provisions Act 2003 (Amended), which grants autonomy to public universities. Secondly, the IPPIS system itself is fraught with irregularities, as many lecturers who enrolled in the system had their salaries deducted unnecessarily. The federal government also showed highhandedness when they refused to pay lecturers who followed the directive of ASUU and refused to enroll on the payment system which ASUU argued was unsuitable for Nigerian universities. This was the immediate cause of the latest strike action by the ASUU which was embarked on, since March 2020. Beyond that, demands by ASUU for better learning environment in Nigerian public universities for which they reached an agreement with the FG since 2013, has not been honoured.

Nigerian public universities are heavily understaffed and sometimes have three times more students for each course of study, than approved by the Universities Commission annually. Usually, the approved number of students per department for each academic year is less than 50 students in a class for regular academic program. But in reality, on average, each department in any Nigerian public university admits well over 100 students, some have as much as over 200 students sharing facilities meant for less than 50 students! These universities also run part-time programs among many other academic programs, as well as Postgraduate programs. These programs are being taught by the few, overused academic staff of these public universities. All these boils down to funding as the universities cannot employ when they do not have sufficient funds at their disposal for salary payment.

As a result the problem has remained constant. The lecture halls are often filled to overflow because most of these lecture halls were built with far less people in view. This in turn has adverse implication on learning and there is only so little a lecturer can do to help most of the students to learn under the circumstance. S/he simply cannot afford to impact such large crowd, most of whom just hide in the crowd and are lost in the crowd. Most lectures in Nigerian public universities are a gathering of crowd. This also makes it possible for all kinds of fraud and impersonation that is characteristic of Nigerian public universities, during examinations. If we have inadequate classrooms, how much adequate will our public universities’ library be? How much more up to date will our laboratories be? These are very disturbing trend that have become the pattern in our public universities; the exact reasons why Nigerian public universities are in the class of their own in terms of failure to meet minimum world standard of tertiary education. Nigeria has some of the very worst education ranking in the world. It is also for these same reasons that the quality of graduates produced yearly has continued to depreciate with such alarming rapidity. There is also the case of de-motivation of lecturers through poor remuneration by government. Although in truth, one cannot say for sure if increase in lecturers’ salary will stop some of them from collecting money for mark, or engaging in other sharp practices that are completely unacceptable. However, if ASUU’s demand is met, it will definitely improve the quality of education currently obtainable in the country’s public universities. There may be no doubt about this at all.

Irrespective of these issues, somehow, ASUU is often seen as a predatory organization that is only concerned about salary increase. But the fact of the matter is that the Nigerian government willingly entered into an agreement with ASUU, sealed with a memorandum of association to fund Nigerian public universities with over 1 trillion naira, which will be paid in installments. Till date, the government is yet to comply with that agreement. With this, it is obvious that Nigerian government has shown scandalous level of irresponsibility that is second to none. Beyond ASUU, as of now, several other labor unions in Nigeria are about going on strike over arguments on payments, welfare package, and social justice, among others. Now, this is the major concern; the Nigerian worker so poorly remunerated, need money to pay for his food which inflation has taken beyond his purchasing power. S/he pays for his or her own transportation fares which cost of fuel has astronomically increased. Nigerian workers still pay for their water, they pay for their light; they pay for everything! How will they not demand for more money? How will they not always agitate for salary increase? If not, how will they meet their basic needs, much less live a decent life without basic amenities being provided for and also with the money to buy same not given them in form of salaries? The obvious failure of Nigerian government is manifest in the fact that today, even the paltry sum paid workers are owed them for long months by some state governments, while others who manage to pay earns bragging right for paying workers’ salary and counting such as part of their achievements; something that ordinarily is and ought to be considered the right of the workers. Even the minimum wage of N30, 000, what exactly can that amount buy for workers in a week, much less one month? In this same country where workers’ pensions are out rightly embezzled by its managers with impunity and reckless abandon, while the government offers pat on the back of those embezzlers. Under this very atrociously harsh and unfriendly Nigerian reality, what other possible option could ASUU and other striking unions have used if not to hold the country to ransom at any provocation by frequently going on strike? If the government cannot even be trusted to pay regular salary and cannot be trusted to fulfill an agreement it entered with a critical part of its work force, what else can the government be trusted for?

In any case, on the part of ASUU, has the union shown that with a better working condition in an improved working environment, its members can be better? Its members will not continue to feast on young undergraduate girls for marks? Its members will not continue to exchange money for marks? Can the other striking unions also be trusted to ensure a vibrant public sector work force and not some time wasters who treat government work as a pastime engagement, not deserving of devotion, creativity or intellectual input?

So these are the concerns. But in all, the students, the innocent members of the public, are the victims. ASUU and the Federal Government will later sort out their differences, with their salary backlogs fully paid but the time lost by students waiting for that to happen, will never be sorted. These students and many others who pay for this crass governmental irresponsibility are the real victims.