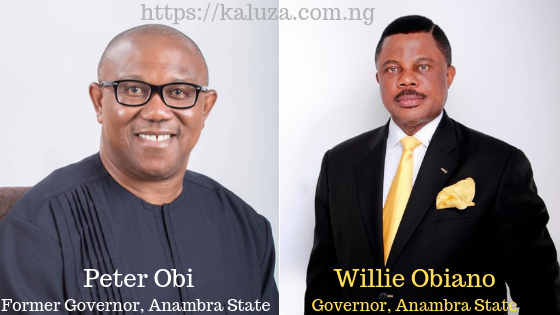 There is hardly any distinction between  a leader, his style, and the leader’s personality. Most times, what appears as a weakness in leadership, is a strength in the character of the leader as a person. I have observed this and from my own interactions with politicians, their personality, personal preferences, individual orientations, convictions, choices, more than any other thing determine the direction of their leadership. In assessing leaders, until we look at the person of the leader being assessed, then we may also miss the point that their greatest asset in terms of character and personality often becomes their biggest undoing in public life. There is an important aspect of this comparison to which much attention has not been given. Those comparing Governor Willie Obiano and former Governor Peter Obi have not made any effort to look at this all important aspect, for proper comparison.

Former Governor Peter Obi is a man who many people hold in high admiration, not necessarily for what he has done, but for his shrewd management of his public perception. This does not suggest that as Governor, he did nothing. Not at all. But his perception index as governor was anything but good. People generally didn’t like him. First, his tiny voice which makes him talk like a woman, very easily gave him away as a weak man, many people then assumed. But Mr. Peter Obi didn’t mind. After sometime, people got use to the voice. Then, it was common knowledge that Mr. Peter Obi does not listen to anybody or cared about what you say or how you feel. He simply went about doing what he wants to do and he readily sacrificed friendship, blanked family and shutout everybody, he did this to a point that he was just man alone. Although at a later day in his administration, he surprisingly made some amends, possibly as a political tool with which he was able, with the help of others, to push Governor Obiano into the Government House of Anambra State. The truth is; anybody who knows Mr. Peter Obi knows he is a very strict person to a fault. As the governor, Mr. Peter Obi called his drivers and security names, obviously think little of them. He called civil servants names and even voters. So here is a man in whose character, friendship cannot last beyond aligned political interest. A man who cannot ask his driver and security if they have eaten. But somehow, he was able to maintain a saintly public perception and later, a favourable public opinion, principally because; Mr. Peter Obi as governor, was not a man of the people. He was not a public person. He showed no interest in what keeps him and many people together. So there was gape, he was just not the person you can reach and therefore many people because they couldn’t reach him or have someone who can reach him, had no opinion or any other perception except the one from Mr. Peter Obi and his handlers.

Governor Willie Obiano is a man given to relaxing with people and sharing some good time with his friends and associates. As a person, he is someone who allows people to live freely and enjoy life. He will personally attend to his close aides. He will reach out to you because he has a lot of regard for friendship and relationship. It is very unlikely that Chief Willie Obiano will personally go out of his way to teach someone a lesson, like most Nigerian politicians would do, including Mr. Peter Obi. Chief Willie Obiano is also a man that cherishes his traditions and origin. Given these personality makeup, his personal preferences and choices, anybody will likely get along so seamlessly and freely with him. In truth, when Governor Willie Obiano is compared to Mr. Peter Obi, as individuals, anybody who knows the two of them will dump Obi for Obiano, without a second thought. Even the most relentless critique of Governor Obiano will always agree that the Governor is a good man. When we listen carefully, people always blame those around Governor Obiano for the hitches the administration is having. At the heat of the 2017 governorship campaigns, even Mr. Peter Obi who led the opposition against Governor Obiano’s bid to return for second term, openly said he has no problem with Mr. Obiano, but has a problem with Governor Obiano. 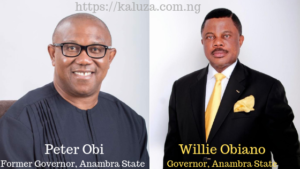 Now what is the import of these personality differences in the leadership of these gentlemen?

Mr. Peter Obi being a closed persona and maintaining a very small cycle, with a sole proprietorship mindset to governance, was able to remove all attention from himself as governor. Being shrewd and as someone who readily sacrificed friendship at his level as governor, he literally ‘unfriended’ many of his friends and close associates before he became governor. As someone who would not ask if you have eaten or if you are good, he was feared and not many people who worked closely with him could even approach him for anything or had the luxury of taking any chance. As a result, there are implications. Mr. Peter Obi gave the state institutions some level of confidence because it was possible for anyone to get any contract in the state and it was smooth for those close aides then to get their travel allowances. So essentially, what everyone considers Mr. Peter Obi’s greatest personality or character challenge was his strength in leadership.

Governor Willie Obiano is a good man like we all agree. I mean, I have never seen anybody oppose the fact that Chief Willie Obiano is a good man. He keeps his friends and associates and brings them close. He keeps his kit and kin close and even gave many of his friends or people recommended by his associates and friends appointment in the government. While Mr. Peter Obi cannot ask you if you have eaten as his driver, Chief Willie Obiano will not only ask if you have eaten but will also give tips, which was a taboo to Mr. Peter Obi. As someone who loves his tradition and generally appreciates African traditions, Chief Willie is often seen in different traditional attires. He has taken so many traditional titles too, to compliment his favourable disposition towards African culture. As someone who likes celebration and relaxation, he attends occasions for friends and associates in person. Given his character and person as a free, liberal man, he also allowed some of his friends and associates including brothers, to man some sensitive positions in government and some of these people literally are suffocating the government. Also because he runs an open door system where many people have access to first hand information or experience of his person, both him and his handlers have failed to shape public perception of his government because, too many people have access and they can say with some measure of authority what the government is doing or not doing and be taken seriously. The apparatuses of government is weakening because there is scramble for all benefits of state power and nothing is left or thrown open to those who are not in government or connected within the hierarchy. Generally, one who is outgoing and cherishes time with friends will certainly spend more money, than the one who keeps no friend or attaches importance to relationships. So in essence, the great, warm and considerate character and personality of Chief Willie Obiano which we all love him for have become his own biggest challenge in strengthening the institutions of governance in Anambra State.

Here, gentlemen and ladies, lies the crux of the matter.