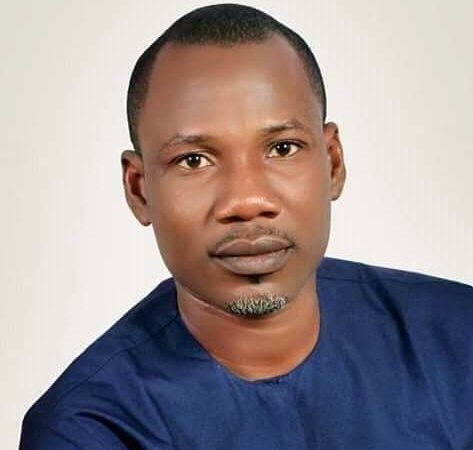 Nonso Okafor and the Audacity to Serve: Is Being Wealthy a Precondition for a public servant to Deliver?

I was at the venue where Hon. Nonso Okafor representing Nnewi North Constituency handed a house he built for childless indigent widows in Okpuno Nnewichi Nnewi, Anambra state. A three bedroom bungalow built to well above average taste, painted and furnished, again to a taste that is above typical. One question kept on popping in my head, “really, are some people more disposed to serve than others on the basis of their privileged birth, economic status or social standing”? This is considering that primarily, politics is seen as a means for self enrichment in our clime. In fact, many Nigerian political leaders perfectly fit into what could be called “accidental political leaders” because not only do they show to be unprepared for the task before them, the motivation that drive them is unconnected to the true meaning of public service. Simply put, public service in Nigeria is not about the people but about self gratification. Leadership has in consequence suffered the most devastating mortification, as little or no attention is paid to the core deliverables in public service. At all levels of political leadership, Nigeria continues to suffer major hindrance in the hands of accidental leaders. 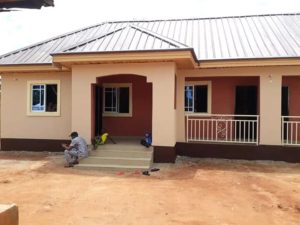 The house donated by Hon. Nonso to the Childless widows

In the chaos of this misnomer, many Nigerians are coming up with explanations and world views, in an effort to explicate the situation and perhaps, help people understand just why it is difficult to get people who are motivated by service into public office. All in the hope that with that, we may get it right. One of such popular explanations is the very popular assumption that a wealthy man or woman in public office will most unlikely have any need for public funds as s/he is already wealthy and as a result, is conditioned to use the public funds to serve the electorates. For most Nigerians, the problem is that people who are not wealthy occupy public office and primarily use same as a means of acquiring personal wealth. This narrative looks plausible considering that almost all Nigerians who have ever served in any public office often seem to be wealthier on account of the office they occupied. In truth, people who serve or have served in public office are expected to attain certain level of opulence. And they usually live to this expectation at the detriment of public funds. Aside this, common sense also tends to support the sequence of events that a man who is wealthy will more likely make a good leader because he is already wealthy especially for the reason that it is public knowledge that the problem of leadership in Nigeria is embezzlement of public funds. At least being wealthy, he has no use for stealing public money. It stands therefore to reason that if a man has no money problem, just maybe he would not have a need to lay a hand on public money. But as simple, straight and credible as this may seem, it is not true. People who are already wealthy may be driven by their greed in which instance public money will only become yet another casualty of their greed. On the other hand, people who are not wealthy may be driven by a strong passion for public service and in which instance, public funds are deployed to public service. Privileged people do not have potentials for quality leadership more than the less privileged others. 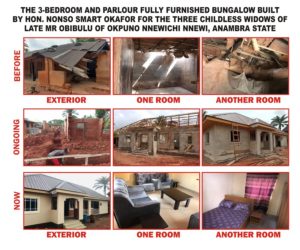 Nonso Okafor like it is well known is not from a privileged background, although he has worked hard for himself as a young man and providence has been generous towards him. He is a young man with a very young family. I do not think he has completed his personal house which construction he started before he contested for House of Assembly. However, if the problem of poor leadership is embezzlement of public funds by leaders who try to fix themselves with public funds, their relatives and friends before they think of the people, then may be Nonso would not have responded to the need of these indigent women, whose mud home was completely wrecked. To be very sure, Nonso did not build the house from his personal income. Any doubt about this was cleared by the Speaker of the Anambra State House of Assembly while he was speaking at the event. It is a constituency project. But that is not even the issue. Constituency allowances given to lawmakers are often retired through some make-belief projects, big but empty claims most of which are usually false. In my estimation, constituency allowance is to the lawmakers what security vote is to the governors. Both are public funds largely unaccounted for. Although some efforts are made at auditing how constituency funds are expended, but it is all fraud because these mostly nonexistent or over bloated expenditure, or both, are easily worked out smoothly. The challenge is; constituency allowance has no specific project for the constituency tied to it, and so a lawmaker is therefore to take on any project at his own discretion. While this is largely no longer obtainable in the National Assembly, it is still obtainable in many state assemblies but may change with the recent approval of Legislative Financial Autonomy by President Buhari. The point is this; any lawmaker who has received his constituency allowance can use it for anything including for his or her personal purposes, without any consequence at all.

A foremost takeaway is that even though a public servant may need money for his personal wellbeing in view of his personal financial state, and can very easily seal off the public fund without traces, he can also choose to serve the public with the integrity of his heart. This contravenes the popular estimation that to stop embezzlement of public money, only wealthy and privileged people should be elected into public office. More remarkable is Nonso’s act of public accountability when we consider that he has one term in office because of Nnewi’s rotational agreement to the House of Assembly seat.

An undoubted fact remains that people do not expect public servants to take on their job responsibilities with their private emoluments. And no matter how generous or willing they may be to sharing their official entitlements, if only they will make concerted efforts to be accountable of public funds given to them, it’s enough. Ordinarily, no public servant ought to be eulogized for doing his job with public money. But taking into account the established pattern in which public funds are embezzled with impunity and no form of accountability ever, Nonso’s audacity to serve against the run of play, is a stimulating action that has exposed years of misappropriation of constituency allowance. Now, there is visible hope of the possibility of change of narrative in the use of constituency allowance much to the benefit of the people.