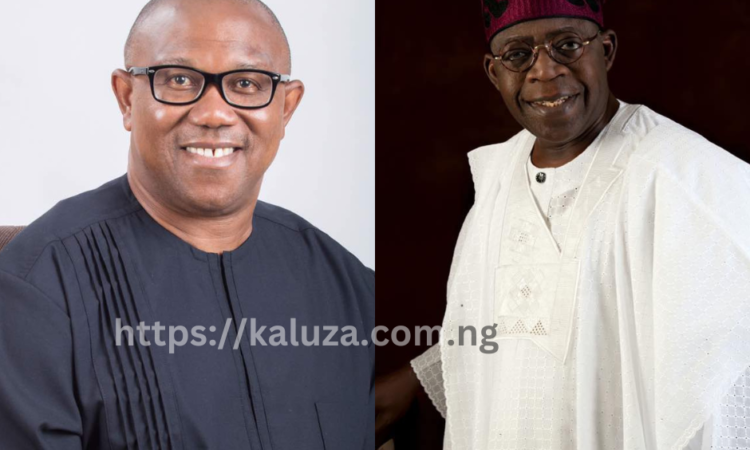 Peter Obi Versus Bola Tinubu: A Comparison of a Legacy of Political Leadership

With the 2023 Presidential Election now counting in days, it might be necessary to observe that whoever wins, will win for political reasons. Those who will lose, will also lose for political reasons. No matter how admirable social change may be, whatever direction it goes within political context, is determined by political considerations. Apparently, these considerations are the things that are going to be shaping the outcome of the 2023 Presidential Election.

Giving clear presumptions based on Nigeria’s identity realities that it would be unthinkable to have PDP’s candidate, Alhaji Atiku Abubakar, takeover from President Buhari, the contest can be safely narrowed down to Peter Obi of Labour Party – LP, and Bola Tinubu of the All Progressives Congress- APC. At least, more or less, Tinubu and Obi represent equity in power acquisition and sharing. Now, the argument really is if Peter Obi has more going for him than Bola Tinubu ahead of the polls. Of particular interest is that both were once governors in their respective states. Then again, both governed states that are on a distinctive regional pedestal. Lagos is distinguished in Southwest and Nigeria as a whole. Anambra is distinguished in Southeast and Nigeria, as a whole, although clearly not as much as Lagos. But beyond all these, both men also have several acclaimed achievements credited to them during that time as Governor. However, by the nature of politics, political power is contracted on the altar of politics, and not on the altar of activism. So what legacy of political leadership has both men left?

John Maxwell, a leadership expert once said that “a leader’s lasting value is measured by succession”. Truth is, nothing cuts visionary leadership short more than a hazy succession plan. Every political system has within itself the exact materials needed to move it to its next desirable place. This is so critical that whoever wins the 2023 Presidential Election, will at the end of the day, still work with those that have passed through the system. They will not manufacture new human beings. This has been demonstrated by people like Doyin Okupe, Benchuks Nwosu and others in Peter Obi’s campaign with relevant political experience, having gone through the system. So, for Peter Obi, as a two term governor of Anambra State, what political legacy did he leave behind?

Obi became governor at forty five years old. But for reasons that are hard to explain, all his key appointees were older men and women, who, by nature’s design, would retire from public life before him. And true, nearly all key appointees of Peter Obi as governor, have retired or are about to retire. Someone like Oseloka Obaze who served as SSG in Obi’s government despite being from Anambra North, Obi’s preferred zone of possible successor, could not succeed him. Instead, Obi somehow brought Obiano, a 59 years old retiree who was his senior in secondary school, to succeed him. Yet, today, Obi and Obiano are sworn political enemies. Basically, even Obiano that ought to be Obi’s political legacy, Obi cannot count on his support. The irony is that people like Okupe, Utomi and Nwosu whom the Obi campaign is tapping from their reservoir, are still relevant because they gained their entry into the political sphere in their 30s and early 40s. It is therefore not rocket science seeing why no former Obi’s commissioner or appointee is following him around, except Obaze and Valentine Obienyem, his media aide. Most of those appointees are now indisposed as a result of old age, or aging, among other reasons. This is also why one can hardly see any Obi’s former aide or appointee making any contribution to nation-building. Out of all Peter Obi’s appointees, not one of them later became anything else worthy of reckoning in public management. Till date, the only person that served under Peter Obi who later aspired to political office was Oseloka Obaze; a decent and urbane man. But had no further opportunity to serve despite having the confidence of Peter Obi who was the governor and could have placed him, but did not. As I write this, I am hoping that I will be challenged by a more accurate fact. But unfortunately, there is none. With this, Peter Obi is going into the 2023 Presidential Election counting on activism and not on his political legacy.

Tinubu on the other hand was governor between 1999 and 2007. From 2007 till date, no 1999 league of governors in Nigeria is still relevant in national discourse, aside those successfully resting in the senate. Tinubu’s case, by far, is not an accident. Bola Tinubu’s relevance in national politics can be traced to his political legacy in Lagos state when he was governor. What Tinubu did was to use Lagos to launch an iconic template, with younger and ambitious aides, most of whom have risen to national prominence from their stint in Lagos state. The Director General of Budget Office of the Federation, Mr. Ben Akabueze, was Commissioner for Economic Planning to Tinubu. He is from Dunukofia LGA in Anambra state. The Vice President, Prof. Yemi Osinbajo was Commissioner for Justice in Tinubu’s government. Others like Rauf Aregbesola, Fashola, have served as governors for eight years and now serve as members of the Federal Executive Council. This list is long and likely inexhaustible. Interestingly, all these people were drawn from different parts and states of Nigeria. Fifteen years on, they are now calling the shots in their rights. The system will always find use for those it has produced, given the right political covering and mentorship. Essentially, Tinubu is going into the 2023 Presidential Election with enormous political capital he painstakingly built from scratch.

Politics is not activism. A politically empowered participant is many times better than hundreds of activists, in shaping and determining political outcome. In perspective, definite advantage accrues in political contests, to contenders with large political capital and reach. Whether we like it or not, the next generation of political leaders in Nigeria are now undergoing some kind of tutelage within. Eventually, they will be launched into bigger responsibilities, which is largely dependent on their political covering. For instance, Prof. Osinbajo might not have ever become the Vice President if not for Bola Tinubu’s covering. Tomorrow’s Nigerian political system will use those that have been plugged-in today, just like it is now using those plugged-in before. How relevant and useful the future looks to a political player depends upon his political legacy. In other words, the manpower he has given the system, which naturally returns back in form of support. This is what Tinubu stands to gain in 2023.