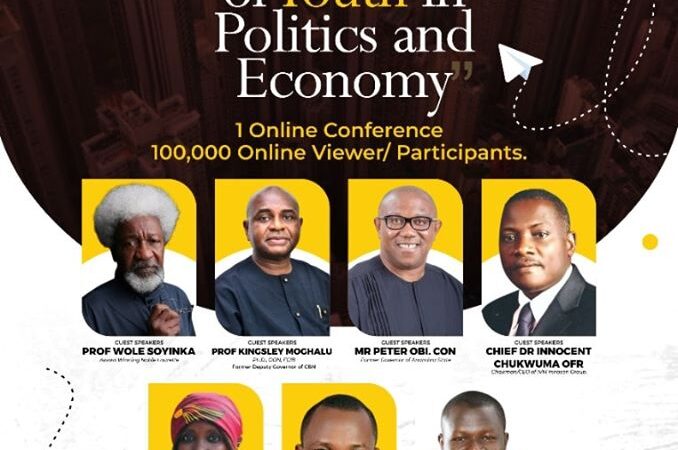 Anaedo Online anniversary lecture series made its debut in August 2019 with speakers like Femi Fani Kayode, Prof. Kingsley Moghalu, Chief Innocent Chukwuma, with Chioma Chukwuka, popular Nollywood actress as the anchor, and host of high profile guests in attendance. The theme of the 2019 lecture, “Digital Media, the Present and the Future”, was masterfully analyzed by Fani Kayode the guest speaker. The event which climaxed with the launch of the maiden edition of the Anaedo Times featuring seasoned contents around the theme, and how people can explore digital media to expand and globalize their businesses dotted the magazine. Speaking on the vision behind the lecture series, Cornel Osigwe who is the founder and Chairman of Freshminds Communications Ltd the parent company of Anaedo Online said that Anaedo online was set up to project the Southeast economic exploits that were usually under reported, but not just that as the need to bridge imminent generational gap remains urgent. “We set up Anaedo Online to help project our voice to the world, especially people from the Eastern part of the country. And in doing that we realize that there is a lot of gap. There is a lot of difference between the achievements of our fathers and the present generation. So while doing the news, we are doing the advocacy so that we can be able to help build up the present generation”, Osigwe said in an exclusive interview.

Reminiscing on the 2019 anniversary lecture, Cornel Osigwe remarked that the vision he had of the lecture series has continued to expand because in doing one aspect; one realizes the need for synergy in other areas and the import of harmonizing these divergent components to be able to achieve the set goal. “We realized that a lot of our people are not taking advantage of the opportunities that abound in digital media in propagating their businesses like it is in the Southwest, we did that to educate our people and show them the benefits of digital media to their businesses”, he said. 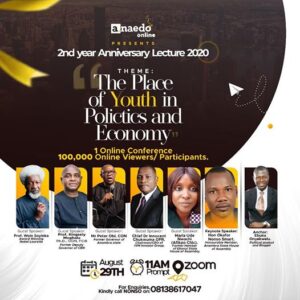 The 2nd Anaedo Online Anniversary lecture is slated for the 29th August 2020 and will be live on all social media channels and hosted on Zoom conference. Intending participants can register through the following link to be part of the programme  https://www.anaedoonline.ng/rsvp/.

The theme of this year’s Anaedo Online anniversary lecture is “The Place of Youth in Politics and Economy” and the event features His Excellency, Peter Obi the former governor of Anambra state, Chief Innocent Chukwuma of Innoson Group, Prof. Wole Soyinka, the Nobel laureate, Prof. Kingsley Moghalu former Deputy Governor of Nigeria’s Central Bank, Hon. Nonso Okafor member of Anambra State House of Assembly, who is the Key Note Speaker and Hon. Maria Ude Nwachi a foremost social media influencer and a former member of Ebonyi State House of Assembly, with Ebuka Onyekwelu, columnist and blogger, as the anchor. Speaking on this year’s event, Osigwe observed that many young people “have not been properly built up to take their place in governance and economy”. Furthermore, he decried “a situation wherein people in their thirties are still applying and looking for job instead of creating their own enterprise”. According to Osigwe, “a lot of the younger generation instead taking advantage of the democratic process by joining politics so that they can be able to constitute and contribute to the governance of our country, they are comfortable being media aides, being touts. So for us, it is about time we do something about it so that Nigerian youths can take a stand in the politics and economy of the country. Nigerian youths should join politics so that they can be able to utilize their ideas in building a nation that we all should be proud of”.

Talking about the 2nd anniversary lecture, the Anaedo Online editor-in-chief, Nonso Nzekwu in an exclusive interview said that for him, the team is trying to live what they preach. “We are youths. We are trying to get as many more youths as possible, to get on board. The event wants to help educate and inspire young people, in their own interest and in the interest of the society”. Nonso also frowned at the situation where the average Nigerian youth aspiration in politics, is to be a media aide to a politician. “So we are starting a fresh discussion, a change of narrative where in few years, some people in their thirties will rise up and take their place in destiny. We are offering a platform filled with some people who have seen it all, done it all in their youth, to help champion the cause of the next generation. Some young people are afraid to take up their place, we want to inspire young minds to go for success”, Nonso said. Commenting on his expectations, Nonso held that he wants the speakers and the key note speaker to inspire youths through their presentations. “We expect our speakers to be an inspiration to the young minds that will join the event. We are looking at about one hundred thousand participants around the world and we are working hard to make it a seamless experience for all participants”, he said.

For the event, Hon. Nonso Okafor who is the Key Note Speaker in an exclusive conversation said that his undying desire to impact lives is his most important motivation. Hon. Okafor commenting on the singular most important factor that has helped him thus far said, “the singular motivation that has brought me thus far despite all odds is the burning passion to make impact and leave lasting legacy in my lifetime”. Recalling his experiences growing up he said, “I grew up knowing that we have a very disjointed system as a nation and there seem to be a coordinated lackadaisical attitude on the part of both leaders and the led. The leaders seem not prepared to better the lots of the people. And the citizens seem very nonchalant about demanding performance and accountability from the leaders and what we have is a vicious cycle that goes on unabated”, Hon. Nonso Okafor said. The most important event for Hon. Nonso remains his decision to do something about the situation. “I decided that I was going to do my best to better the society and I noticed that each time you set on a mission that is not selfish, God will back you up with all necessary vigor and grace to accomplish it”, Hon. Nonso averred.

Speaking on the reasons why this year’s lecture has the caliber of speakers lined up, Cornel Osigwe opined that “these are people who in their youth days took advantage of opportunities and were able to build something great for themselves and the society. The programme is going to be power packed and it is something I know will impact positively, the lives of every youth who keys in and I believe their lives is not going to be the same again. This is part of our contribution in Anaedo Online, to be able to build a society that we all should be proud of”, Osigwe concluded.