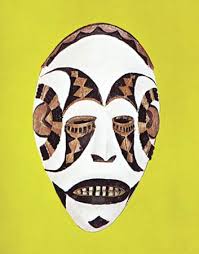 The Crime of Being Igbo in Nigeria

Being an Igbo man or woman in Nigeria is a job and not an easy one at all. Little wonder as a result, often, some of us find it a bit uneasy to take on debate of Igbo ethnic profiling because we don’t want to be misunderstood. We want to remain acceptable to other Nigerians who look at us and say things like “you don’t behave like an Igbo”, or “you are different from the Igbo people I have met”, unbeknown that though such comments appear like compliment, but actually they are the most compelling ethnic slur imaginable, dutifully delivered. Most Igbo professionals in cities outside Igbo land can reckon with this.

There is this palpable suspicion and shock that often greet some Nigerians of other ethnicity, prompting them to ask rhetorical questions like, “you mean you are Igbo”? Even expressions like, “Igbo woman”, “Igbo sense”, are rampant and laden with revulsion; such comments or questions however they may appear, are not innocent. They are hushed reminder that as an Igbo man or woman, you have to be on your best behavior considering that you are being tolerated. Perhaps, you have to be apologetic for being Igbo, may be even forgo your Igbo identity so you can be accepted. So pathetic that a number of Igbo people out of desperation have had to change name, while some deny their places of origin just to secure a university admission or a job in Nigeria. Well, if those comments and questions were innocent as they may suggest on face value, is there any goodwill in singling someone out of his own ethnic origin? Is there any honour for the man of whom it is said is not like the son of his father? Can one be Igbo but without Igboness? Therein lies an effort to turn reason against its own head to the effect that, perchance, an Igbo without Igboness is cool and acceptable. The question now is; can one be Igbo and not be Igbo at the same time? This is why such comments are even more dangerous subtleties aimed at abolishing the Igbo or at least aimed at containing/managing the Igbo ‘excesses’ in Nigeria. I often shudder at these expressions and attitudes of other Nigerians towards Igbo people. Igbo abhorrence is real and while some people may boldly say they cannot rent their house to an Igbo man for instance, others just single out some Igbo people telling them how different they are from other Igbo, either way; the purpose is to keep the Igbo in check in their own country. In Nigeria today, some Nigerians from South-South region have to keep reminding some of these bigoted human beings that they are not Igbo so that they can be seen differently or treated better. It stands to reason that in Nigeria, one really needs to stay as far off from Igbo as possible, to be accorded some dignity or respect as a compatriot. 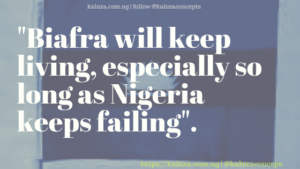 What is the crime of the Igbo man in Nigeria? Why are Igbo people constantly targeted for torment and smear campaign even when there is no provocation? If it is not about “average Igbo men” who are said to be victimizing women, notwithstanding that Igbo women are the most education, most liberated and most upward, it is about some other accusations that only but a figment of the proponent’s imagination. Aba women riot was championed by Igbo women in 1929. That is to say that over one hundred years ago, Igbo women gathered and caused a national revolution against colonial forces of oppression. Women victimized by their men especially in those days, cannot lead that campaign against colonial forces. Today, most young Igbo professionals are pushing their wives to acquire more education. Several Igbo businessmen have trained their wives or even girlfriends in the university. Many Igbo women today are shinning stars and their husbands are not worried about the success of their wives, yet, people came up with average Igbo men and how they are the highest sustainers of inequality against women. Many people try to explain that the campaign was not against all Igbo men. But it is not difficult to see the underlying hatred that drives that campaign. Now if it was not a deliberate attempt at profiling the Igbo man, who do we call an average Igbo men; a rich and educated Igbo man? An uneducated Igbo rich man? A rich Igbo business man? How exactly do we measure an Igbo man to determine those that are average? And so one sees clearly through the fault line of such comments as “senseless Igbos” made in contrast to “some sensible Igbo” by Susan Coker of Rant HQ group. The group; an online banter spot of some sort, with no modicum of serious engagement has over one million followers. Her bigoted statement has sparked off heated debate on Igbo hate. Why she keeps passing her subtle bigoted messages to over one million people remains a puzzle. Even more worrisome is the fact that many non Igbo people do not find her comments worrisome. Still, some Igbo people are making excuses that she was not referring to all Igbo people but the “senseless ones”. It is the same pattern of bigotry meted out to Igbo people repeatedly such that many now conceive of it as a compliment. Perhaps, maybe they are sensible so it is not for them.

Even the President; Buhari made similar comment of 95% in contrast to 5%, when he emphatically averred that political benefits under his watch will be distributed according to the support he gained during the election. Living to his words, President Buhari has maintained his sharing formula to the extent that critiques have become used to his appointment pattern. 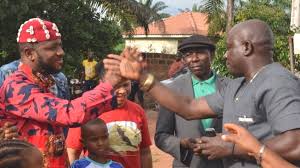 Similar profiling happens when there are thirty governorship candidates in Anambra state or when there are two or three Igbo people running for President or when two Igbo people gets into a fight. The message is that Igbo people hate themselves and are in disunity. But when Atiku contested against Yar adua and Buhari, it was not disunity. When Falae contested against Obasanjo, it was never disunity. When people of other ethnic groups fight and oppose each other, it is not a case of disunity and self hate. But when it involves Igbo people, it must be interpreted as an example of self hate and disunity among Igbo people. This lie has been told for such a long time that some people have started thinking that it is true. On the contrary, this is another attempt at ethnic profiling. 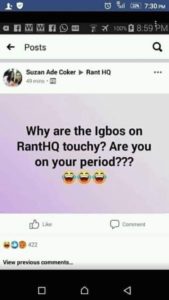 Igbo people should be able to live freely without name-calling or ethnic profiling and without the fear of being denied opportunity they are qualified for, purely on the account of their ethnic identity. Nigeria and Nigerians must deal fairly with Igbo people and indeed, other Nigerians and human beings as partners in the same human heritage.