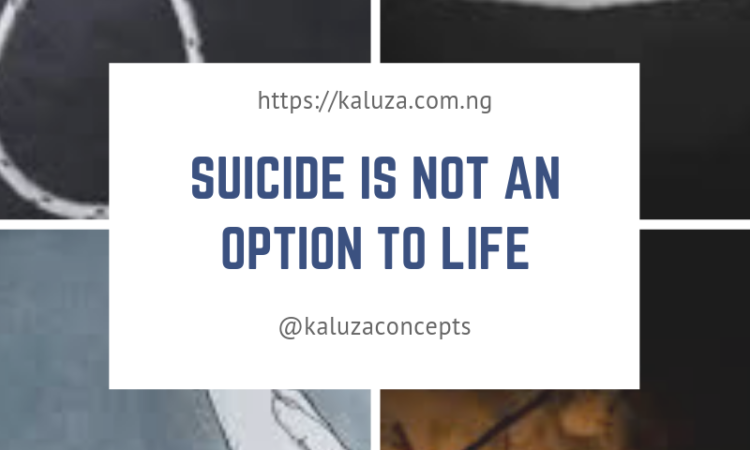 I understand there is  a medical angle to suicide. In fact, suicide can be and is often seen from medical prism. I am not about to look at it from medical perspective. I am not a trained medical practitioner nor am I particularly fascinated by the explanations to suicide often given by medical practitioners, which makes it look like a normal abnormality, whatever that means; but something (that should be) much more acceptable. I am a Social Scientist and I will look at it, especially the rising trend among young Nigerians, from social perspective.

The underlying fact remains that as of now, there is hardly any week one don’t open Facebook to the news of someone who has taken his or her life and if anyone don’t find this extremely disturbing, then there is real problem. Today alone, I have seen at least two cases of suicide involving young promising people, who just took their own lives.

Fact is, the struggle for acceptance among young people is real. There is this craze for stunt and publicity. Mind blowing, irrational desperation for fame and recognition. There is simply a lot of madness going on these days and especially young people want to just catch in. There is intense pressure on many people today, because usually they think they are not meeting up. Somehow, they believe their friends are all ahead of them and they can’t just take the heat. This is basically owing to the showoff on social media, which makes every other person’s life beautiful except their own life. There is also this unspoken competition going on; people competing for who is more abnormal than the other person. 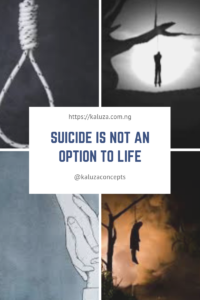 More so, many people now set very needless high expectations which they often fail to meet. The fact is, social media tends to bring the world closer, but it also causes so much sadness, so much loneliness, with many people becoming victims of their own expectations and social interactions on the web, when they fail to realize that one can live more, even better, with less. This is exacerbated by exposure to all kinds of materials on the internet. There are tens of websites that support suicide. These websites help and encourage people to commit suicide. One of these websites has reportedly helped over seven million people take their own lives.

Suicidal thoughts is madness. I think the medical explanation agrees to this. Anyone at this level needs help and has to cry out for help. Sad thing is, there is no special reason to take one’s life. In fact, these suicide websites encourages suicide over something as ‘serious’ as a flat tire, yes, or college application rejection and people are actually taking their lives for simple life challenge or for depression, instead of sicking help. Lately, more than two undergraduate young Nigerians have taken their lives over a relationship breakup and of recent I heard, over poor JAMB score.

Anyone who commits suicide is a terrorist and there is rarely any difference between him/her, with a Boko Haram suicide bomber except that s/he is her or his only victim. Just as s/he has left family and friends who now have to deal with their selfishness and folly, without a thought. Truth is, many people have become indoctrinated with suicide thoughts and have actually accepted suicide as an option. We are currently living in a time where suicide means little or nothing to some people out of frustration or their inability to match their expectation and they have access to materials and websites which encourages them to go ahead and take their own life.

We must cease the rationalization of suicide. Anyone who takes his own life is unfit to be excused or even pitied. Anyone who commits suicide is selfish and have no regard whatsoever, for those that treasure him/her. They simply don’t deserve the excuses and pity many people are showing them. And aside that they don’t deserve it, they just ought not to get it. But for us the living, we must live and show others why they too must live. The only time we must pity and excuse someone is just before the real act of suicide. We should offer help to those who are depressed or are going through difficult times.

Life is full of challenges and that’s essentially the difference between life and death. Even animals are faced with their own challenges. What is life without challenge, or frustration, or difficulty, or disappointment? There is absolutely no bravery in taking one’s own life. It is cowardice of unequal proportion.

Let it is known that suicide is not an alternative to life or life’s challenges and difficulties.