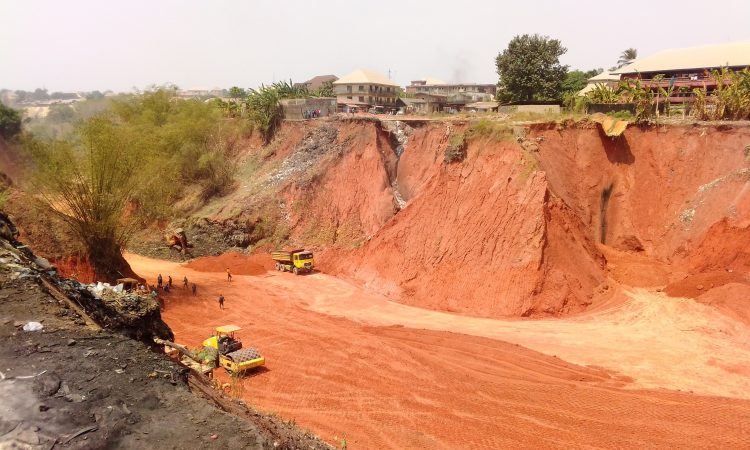 Anambra State Governor; Willie Obiano, today during the inspection of the ongoing work at 100-foot road erosion site in Nnewi, said that the government is putting in so much into erosion control projects across the state. He however lamented that the number of active erosion sites in Anambra is too many and therefore it is not possible for the state government to meet up people’s expectation in addressing erosion menace. According to the governor, the state has over 900 active erosion sites all of which require urgent attention so as to reduce the cost on people’s property and landmass. 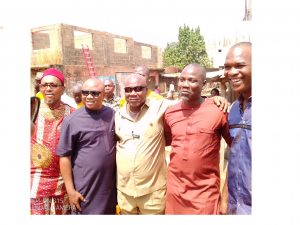 The 100 foot road Nnewi erosion is located almost at the nerve centre of Nnewi, an industrial and commercial city in Anambra state. The erosion  was widely reported at the hit of its expansion last year, with many lamenting  what they call government’s negligence, even as many houses caved in and were washed away by the erosion. During the inspection of the ongoing erosion control, the government explained that it is difficult for the state to take on erosion projects because they are very expensive. He noted that several efforts is being made to secure Federal Government’s intervention. The Governor further remarked that the partnership with World Bank has been helpful, but because of the volume of active erosion sites, federal government’s intervention is still seriously needed. 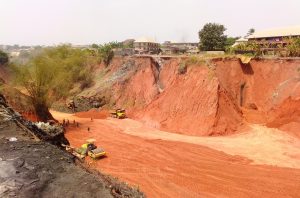 Also the Obiofia Nnewichi Nnewi erosion is another ongoing erosion project in Nnewi, which Governor Obiano today hinted, has cost the state over N7 billion, while the 100 foot road erosion control being handled by IDC construction company, will cost the state the sum of N3 billion, Obiano said. 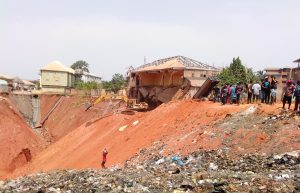 Therefore, the government of Anambra state is expending about N10 billion on two erosion sites, in Nnewi. 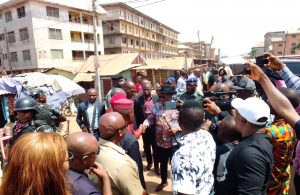 Arrival of Gov. Obiano for the inspection