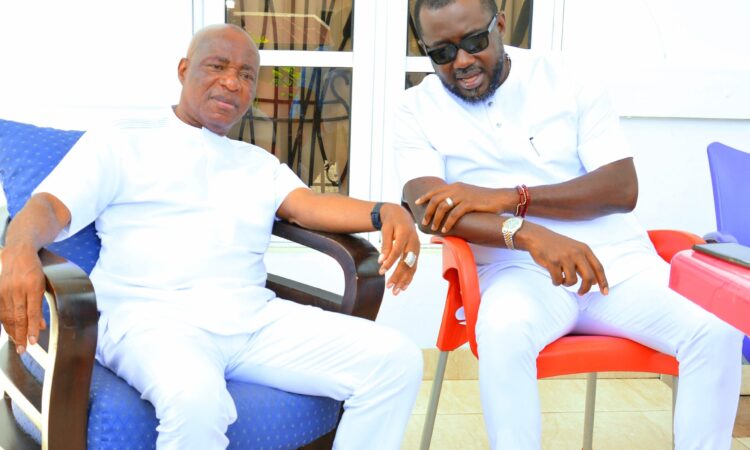 A reputable businessman and political stakeholder in Anaocha local government area, Chief Ifeanyi Chukwuka has given his nod to Uzuegbuna Okagbue’s aspiration to represent Anambra Central senatorial district at the 10th senate.

During a consultative visit today by Uzuegbuna and his team to the partial home of Chief Chukwuka in Adazi-Enu, Okagbue said that he is working hard to go and represent Anambra Central in the senate and that he has come to pay him his due and deserved respect by formally notifying him of this aspiration and why it is important that he is supported. “You are a pillar of support to our party, APGA, you have been very supportive. My efforts in this project are to ensure that APGA keeps moving forward. My brothers who are also in the race with me, in my thinking, have done there bits, but it is not enough. What is required to win Central for APGA, many people believe I have it and I am prepared to do this job differently”, Uzuegbuna said.

Reacting to his speech, Hon. Okey Okpala said that Uzuegbuna has done what is expected of him to do and what is left is for Chief Chukwuka whom he described as his political boss, to give them directive. For Sunday Alidinume, a former ward chairman in Adazi-Enu, he commended Uzuegbuna’s foresight and political acuity by being able to identify a power centre like Chief Chukwuka. “What Chief Chukwuka says to us is what we will do”, he concluded.

In his remarks, Chief Ifeanyi Chukwuka said that Uzuegbuna is known to him for a long time. “You are not a visitor to me; you are not a new person to me. I know you. Some people might be wondering why I call you the great Uzu. Anyone who sees and knows you knows that you have pedigree and you have the experience; it is not in question at all. You also knows how government operates. So I believe that APGA will conduct a fair primary election. As you have come to Adazi-Enu today, you are my good friend; and you have a very good rapport with my leader. Therefore, for Adazi-Enu ward 1 and 2, my assurance is that you do your part; we will do others that we have to do. APGA was unserious before about Anambra Central senatorial seat, but now, we have decided that APGA will win Anambra Central seat. We know the problem of APGA that time and by the grace of God, that error has been corrected. We are standing behind you”, Chief Chukwuka concluded.

Anaocha APGA local government chairman Barr. Obiadi who rushed in while Chief Chukwuka was talking, upon recognition by host, thanked Uzu and summarized that the local government will take a stand, irrespective of whoever is in the race and where ever their political leader directs, is where they will go.

In a brief interview with the press at the end of the meeting, Chief Ifeanyi Chukwuka described Uzuegbuna as a good friend, competent and knowledgeable man. “Uzu is a good friend of mine. I have known him for about 12 years now. I call him great Uzu and why I call him that is because he is a great guy. He is a guy with style. He knows what government is. He knows the system and how it operates, so I have no doubt he will make a good representative. I give him all my support”.