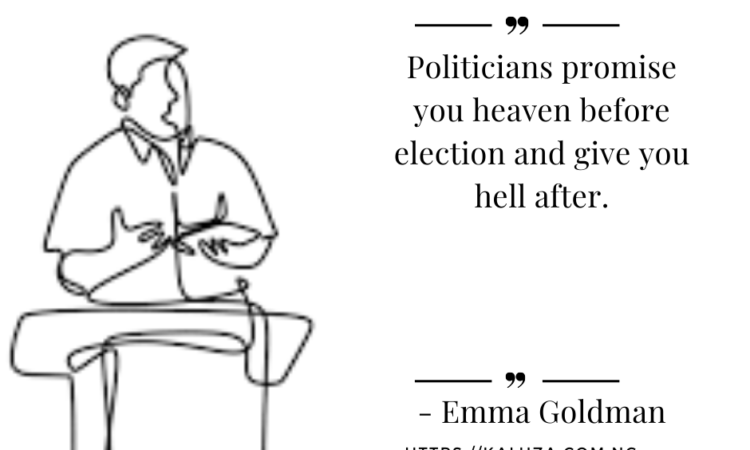 What Must Guide the Choice of the Voter: Electioneering Promise or Policy Statement?

Election seasons are often one of the most entertaining seasons. Politicians go at any length to make spurious and outrageous claims; some easily passes for comedy even as they try to insist against commonsense, on the feasibility of their assertions. A case in point comes to mind; not long ago, an aspirant in the coming gubernatorial election in Anambra state reportedly claimed he will give the state twenty-one universities, that is to say that every local government in the state will have one university. What followed was that people started making wild jokes off it, claiming university for their kindred as well. As funny and unserious this may appear, the reality remains that people are treated to sumptuous entertaining sessions during election seasons, particularly because, our politicians and their handlers do not take the people any serious. This situation has emboldened Nigerian politicians to openly tell lies and make bogus claims and there is absolutely no consequence on them or their ambition. Nigerian voters are even quite accustomed to this pattern, much so that they are well informed that politicians can say just anything to be able to secure public sympathy and support during electioneering. Hence a popular saying that Nigerian politician can promise to build a bridge where there is no river. Such is the predictable character of Nigerians jostling for public offices. The popular code for public office seekers in Nigeria is to simply “tell them what they want to hear” and so it was that a certain candidate for senate in Imo state boldly declared that he will give the people money, this was his own campaign promise. And the crowd erupted in what seemed like an ecstatic jubilation, apparently satisfied. Simple accountability interrogation would have made a lot of difference. That we have people, who cannot think deeply about our problems and cannot proffer workable solutions wanting to lead, is embarrassing and intensely disturbing. But most people obviously appear satisfied with empty promises thrown about by politicians begging for votes.

The problem is that clearly, there is a mix-up. Many assume that campaign promises passes for policy statement, objective and thrust. They just want to hear something that will get them excited. Maybe dance on the stage, sing and just declare you will make them happy, it might be enough. The expectation is so low and terribly misguided. Hence politicians conveniently use promise as an escape route. Promises are made not necessarily with the intention to fulfill them. More so, promises are kept at convenience. Sometimes, even when promises are made with the intention to be fulfilled, they are forgotten. But again, the one making a promise may not be abreast of the vagaries of keeping those promises. Such that when it is time to fulfill it, a different reality on ground which he did not plan for, forces him to abandon the promise. Therefore, it can be generally agreed that anyone can actually make any promise and politicians jostling for public offices are the least people should take seriously with a mere promise. But then when we, against logic and commonsense still choose to support public office seekers on the basis of what they promised, then, it speaks to the quality of our expectations from our leaders. It also means the people are disempowered, battered and incapacitated to make the very first right decision on the premise upon which they can be better governed.

As the electioneering for who occupies the seat of governance in Anambra state thickens, here is a reminder that “promise” does not work, especially in politics. Promises are not always well thought out or always a product of sound reasoning. Matter of fact is, in politics, it is an easy manipulative tool readily deployed by politicians who, likely have no agenda, to sway unfounded support. Promise is something of convenience and has no place in any political equation. By nature, people can always change their minds. Worst still, there is no question of how and there is no firm basis to interrogate a mere promise or even demand for proper accountability, afterwards. Now, if you promise to give x or y, it is not same as writing it down and going through the rigor of detailing how you will deliver x or y, as promised. You will agree that in the later instance, one is more likely to do what he has studied and written down in details, than what he just said. That is to say that we are more likely to honour a written statement than a mere promise.

Therefore in politics, what works is policy thrust, detailed and penned down. This becomes the pact between the voter and the leader. Here, it is in black and white what an aspiring public officer wants to do and how he intends to do them. Political governance does not thrive on empty promise. You must task your mind and brain to be able to come up with solid answers to questions about what you want to do and how they will be done, possible challenges along the path of doing it and possible solutions as well. Promise is a lazy man’s safe heaven. No questions and no answers, and no responsibility. No citizen should be excited over any political promise coming from anyone.

In politics, promise is a charade and a scam. Development is deliberate. Good governance takes a lot of hard work and conscious planning, effort and detailed analysis of events and policy options. It is not something you get by merely declaring that you can do this or that when you become this or that. No Nigerian voter should accept any promise from any politician, for whatsoever reason. Nigerians deserve better. Otherwise if they continue to simply resign to promises, then the people themselves have resigned to cheat themselves. If an aspiring president wants to do a,b,c, let him spell out in details how he wants to go about it. If an aspiring governor wants to “transform Anambra state”, let him say precisely how he wants to achieve that. Anything less is vague and futile.