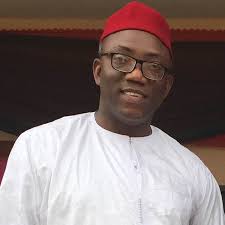 When I was invited to attend an employment interview by Broad Bank of Nigeria in April 2004, I didn’t know that I was in for a shocker.
I was moving from Fidelity Bank and was to be interviewed for the position of the head of marketing or a branch manager.
The head of the interview panel was the current MD of Fidelity Bank. He was in charge of Commercial Banking in Broad Bank then.
With a serious mien and eyes piercingly focused on me, he asked me to introduce myself in 2 minutes and I did.
I least expected the follow up question.
“Young man, what is Glycolysis in a layman’s language?” he shelled out.
“This is obviously not a bank interview” I told myself.
Why the Biology or Biochemistry question ten years after graduating from the university?
“Perhaps, this man wants me to fail this interview. He obviously has someone else in mind”, I suspected.

Mr. Anayo Nwosu, Group Head, Keystone Bank
He should have also seen that I have PGD and Masters degree in Management but he chose to embarrass me with questions on topics I possibly would have forgotten.
I had prepared for questions on banking, accounting, marketing, economy and current affairs.
Far from that.
The interviewer was testing my ability to remember what I read or was taught long time ago.
Some of my friends would shout: “Holy Ghost Fire!”
But 10 years residual memory test was somewhat too tasking.
“Glycolysis is the process by which carbohydrate is broken down in the body to release energy and gas; it is simply the fate of glucose in the glycolytic cycle”, I promptly answered.
“In what form is the energy released?” he followed up.
“The energy is released in form of adenosine triphosphate or ATP”, I answered.
He was not done. He veered into politics.
“Why do you think President Obasanjo appointed Dr. Ngozi Okonjo-Iwela as the finance minister?”
“I believe the president wanted to tap her experience in multilateral agencies, especially the World Bank, which would be helpful in negotiating Nigeria’s huge foreign debts reprieves. I also think that she is well educated and could manage the country’s economy well”, I answered expecting another follow up question.
The next question was surprising.
“When shall you resume? Congratulations! We shall give you the next level you had asked for,” Mr. Okonkwo said, signaling the end of the interview.
The bank interviewers’ strategies have not changed even up till today.
They want to find out if you are actually who your resumé says you are and even more.
The interview panel will ask you any question to find out the following:
1. To what extent you can display your academic brilliance beyond what’s in your CV.

2. Your ability to translate theoretical concepts to practical settings.
3. Your confidence levels measurable by the way you take on questions you are asked knowing that your body language speaks louder than your voice.
4. A demonstration of your awareness of the socioeconomic and political happenings in the country and beyond.
5. Your ability to communicate very well in spoken in English without offensive grammatical errors.
6. Whether the candidate is teachable, determined from the way the candidate reacts to questions he or she got wrongly or how quickly he/she could take a hint if given.
You could be asked an embarrassing question like “are you a virgin?” and would be observed to ascertain how you could manage embarrassing situations.
I look out for that candidate who would fail a question but would respectfully seek for the answer from me, the interviewer.
How else can one display teachability?
It is an unforgivable sin for a prospective or experienced banker on the hot seat not to know the meanings of GDP, GNP, MPR, Budget and FAAC.
The candidate should tell who is the governor of CBN; Ministers for Finance, Budget & National Planning and the Accountant General of the Federation.
Someone going for a bank interview should know the differences and interrelationships between Fiscal and Monetary policies and the departments responsible for formulating and implementing which.
The experienced hire should be able to demonstrate the relationship between Balance Sheet and P&L account.
He/She should tell how the activities of a banker could result in either profit or loss.
New hires should dress like practicing bankers. It has a positive psychological influence on the interviewers.
Indecent dressing can only impress randy interviewers who are in the minority. So, make your appearance conservative.
Candidates would be deemed circumspective if they could hide their bodily endowments in the chest, waist and legs.
Projecting or accentuating your erogenous zones or endowment could send unintended vibes.
As years passed by, I have had to head many bank employment interview panels and have come to know why many candidates are not successful.
I could tell a candidate that made a second class upper division through corruption or through “chicken method” also known as cramming.
Successful candidates in the interviews I have so far conducted must have proven to me that they understand concepts from the first principles.
You have to justify the investment in your education by showing it as the interviewer cannot enter your mind by Bluetooth to know your worth.
A habit of listening to 9pm NTA news or 10pm Channels TV news is very invaluable.
Radio Nigeria network news at 7am is also a good teacher for job seekers on current affairs and economic discuss.
Most often than not, candidates are responsible for their own failure to secure their dream jobs.