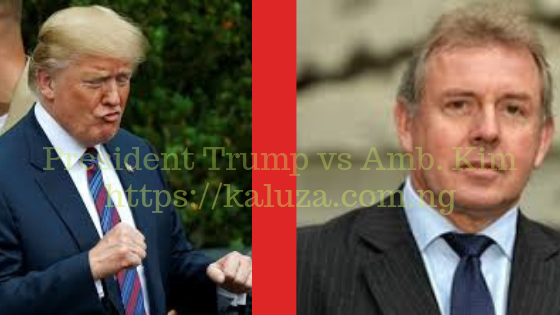 What we must accept in dissecting international political behaviours is that National Interest remain paramount in all dealings of countries around the world, especially civilized countries. Any attempt to belittle, ridicule, or disrepute a country’s image is met with the utmost resistance possible. Ambassador Kim Darroch the former UK ambassador to US certainly has his powers but that does not include holding a private opinion that has been made public. To be sure, he can hold any private opinion and indeed, send same and so long as it does not go public, there is absolutely nothing wrong with it. The moment a private information goes public in diplomatic relationships, especially one in which a country like the US is said to have an ‘inept’ President, such message has crossed the diplomatic line. There is a line; a ‘national red line’. The moment Amb. Kim’s message went public, he crossed that line.

Politically speaking, Amb. Kim very well qualifies as a threat to US National Interest and National Security. That is the fact. His comment about the President of the US will affect, perhaps, shape US relationship with the UK and probably other European countries. A comment from the President of the UK in the US, on US that predisposes it to not have favourable reach or influence over UK or any other country, is certainly against the US National Interest. The comment is also a threat to US National Security. The persona of an ambassador is one too heavy that such a comment against the leader of the country, in which he serves, is potentially dangerous with serious consequences, especially when made public. There is also the aspect of clear personal insult on the person of President Trump, and again, for the fact that the memo has gone public.

Realistically, it is tenable that Amb. Kim released his private conversation to the UK Government, about the US leader, on purpose. The memo was made public on purpose. One of the reasons is to cause remarkable political damage on Trump thereby reduce Trump’s influence and possibly put him in a very bad position ahead of the US Presidential Election. The timing of the memo very clearly suggests a political plot against Trump’s bid to return to the White House next year. But beyond Trump, it is a slight on the Presidency of the United States and can very well be interpreted as espionage. Amb. Kim should hold no public opinion or interfere in the internal affairs of the US.
What many people don’t know is that once leaked, that private memo cum opinion, has become a weapon of internal insurrection because the opinion of such a high ranking character of an ambassador, has consequences with possibility of destabilizing a country, raising/strengthening opposition against the US government thereby interfering with the US internal affairs. 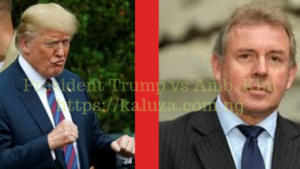 My point is that Amb. Kim Darroch remain at liberty to say anything and share any information with the UK government in line with his job, provided it is not made public. Once it goes public, it is against US National Interest and Internal Security. In reality therefore it is perceptible that Amb. Kim made his private mail public to jeopardize Trump’s chances at the polls. His comment made public, constitutes an element of internal destabilization for the US. We need to understand this. Western countries always use such tactics to cause internal crisis and destabilize Third World countries. This sort of tact is often employed to raise internal enemies that will eventually ground a government. They also use the instrumentality of media relying on their very powerful and established media houses. For instance, Can you count how many times Western Media say any good thing about Third World? It is on purpose. Hence, Amb. Kim, it should be believed, tactfully released his private mail to spite Trump and also possibly make Americans rise up against him, principally to dwarf his political ambition. The intent to turn the American public against the President, with possible mass protest and violence, is conspicuous.

If for the purposes of this argument one chooses to be blind as to who leaked the memo, pending the conclusion of the investigation, well, politics is never blind about the source of a political move. Otherwise, how else does a private conversation or memo gets out? Someone leaked it. That someone in real politik, is Amb. Kim Darroch. Although as expected, he will never accept it. The UK government will also never accept it, essentially because in international politics, manipulations, lies and denials are the currency with which transactions are conducted.

At least we can all agree that Amb. Kim resigned based on intuition; his calculation that President Trump will take steps to declare him persona non grata. His resignation was a smart move for his own soft landing.
What I am talking is real politik. Realism. In which case it follows that considering that Amb. Kim was the one in charge, he was the one that released the memo. He was the one in charge and he must be held responsible. This has not much to do with facts or evidence, more than it has to do with intuition. Politics; local and international, rely more on intuition. Hence, most times, what leaders or politicians do have no basis or root in fact. There is a mind for politics and for understanding political games. Politicians are often guided by their intuition.

But in any event, if it does happen that  Amb. Kim Darroch was innocent but somehow sabotaged by his own staff or a member of the UK government, through releasing his private memo to UK government, to put him a tight corner for whatever reason, then he is a victim of the circumstances of international politics. Just one of the casualties of the strong waters of international politics and there is nothing we can do about it. Maybe Amb. Kim Darroch was not even a casualty, but a man; a smart diplomat who understands when it is time to quit.