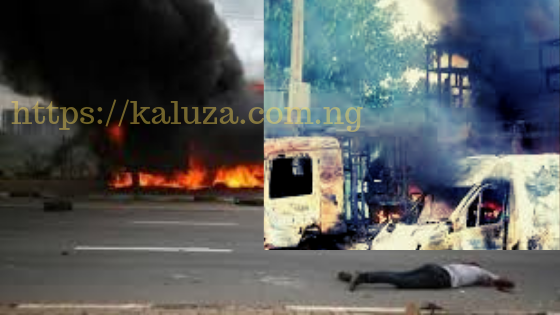 Nigeria is so easily predictable. Our leaders flitter several strategic opportunities to avoid a time bomb in dealing with groups and end up walking gallantly into the most dreaded, so imprudently. And then everything looks as if they happen suddenly. There is no emergency situation anywhere in Nigeria, what we have is escalation of badly managed situations. Unfortunately, in each case, there is always the assurance that Nigerian government will not be up to snuff, in dealing with habitual challenges that meet head-on with governance.

There seem to be this believe that dissenting voices, agitation or opposition must not be given a foothold, much less listened to. There is the conceptualization of opposition, dissent, or mere objection no matter how socially or legally justified, as an enemy of the government and state. Something that looks like fascism, but it is not. Nigerian leaders often believe that state violence answers all dissent. In all, far less intelligence, strategy and tactics are required and consequently expended in governance process. Generally, the government believes it can buy up anybody and if it proves difficult or impossible, then, it will rely on the state apparatuses of force, to bulldoze its way through.  To that extent, it is important to observe that the Nigerian state has not been faced with any major emergency. All the difficulties that have faced the country both in the past and present, came from this praxis, this pattern of government behavior towards the governed, opposition and dissents. It is essential that it be noted that the current insecurity across the country is a direct implication of government’s consistent failure to strategically engage and explore the several windows of opportunities for proper resolution of dissent as is expected in a democracy. 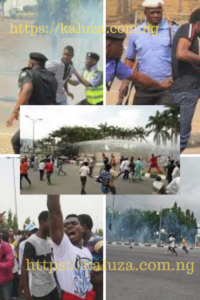 In 1999, the President Olusegun Obasanjo led Federal Government advanced the army into Odi, and practically leveled the entire village, after the community had skirmishes with some officers and eventually some of the officers died. Of course, that was a major action that escalated Niger Delta militancy which eventually climaxed around 2004 and almost crippled Nigeria’s oil production. As a matter of fact, it was the amnesty granted by Late President Musa Yar’ adua for Niger Delta militants, that helped to restore oil exploration activities in the Niger Delta. Recall that in 1995, Late Ken Saro-wiwa and 8 other Ogoni activists were killed by the Government of Nigeria. While Niger Deltans were still mourning their losses, in 1999, almost a whole Niger Delta village of Odi was wiped out by the government of Nigeria. A few years down the line, the same Nigerian government spent a lot more in an amnesty programme for militants, than it would have spent in listening to the agitation of the Niger Delta people and also making honest efforts in addressing their demands. Sadly, till date, Niger Delta militancy has come to stay and the government loses more money and spends even more trying to pacify them. We must therefore construe the Niger Delta militancy as a direct consequence of not just governmental failure but also the impact of state violence against her citizens.

Look at Boko Haram, which today is recognized as a major terror organization around the world and for which the government has spent billions trying to contain. It must not be forgotten that Boko Haram once was a group of dissents, who constituted themselves to use civil disobedience to register their displeasure with the government of Borno state. Crisis started when their members refused to use crash helmet to ride motorcycle in Borno state, which the security agents responded to, with violence, resulting to their protest and eventual death of their leader, Mohammed Yusuf. The rest they say, is history. The point is, there would not have been Boko Haram if the government took a more strategic path in dealing such or any  group of dissents. But what happened after the death of Yusuf? The same government gave the group the sum of N100 million to soothe group members, for the death of their leader. But then, things were already out of control. You cannot regulate violence and once people are pushed to the wall such that they respond accordingly in defense of their humanity in life or death, a new trend has emerged and it will be difficult to contend.

In the case of Shiite protesters, till their recent violent confrontations, they have been making all manner of appeal for their leader to be released. Their leader, a man being held against the knowledge of the law. Granted bail several times but snubbed by the government and for over four years, he is still being held in detention. This is even after over 300 Shiite Muslims were killed in Kaduna state in a most crude, reckless and inhuman manner, without any consequence, whatsoever. As of now, El Zakzaky and his wife are more like political prisoners. Government is holding a man and his wife they have failed to convict and yet refused to obey several court orders for the man’s bail and yet this is a democracy? The government has also ignored completely all demands of Shiites and passionate appeals they have been making for years now, for the release of their leader in line with the court order for his bail, yet, he is still being held. Now, they have become offensive and violent. Their past two outings have been worrisome with the last one resulting in the death of a Deputy Commissioner of Police and a corps member reporting for Channels Tv. But to this moment, government has not resolved the issue. This is much comparable to the government refusing to talk with Niger Delta people who were having extremely terrible time from the oil exploration activities in the region, which destroys their crops and kill fishes, of which are their main sources of livelihood. Yet the same government deployed force on them when they protest. It is like Boko Haram refusing to comply with a government order and instead of talking with them, government deployed force.  Today, Nigeria is still dealing with Boko Haram and Niger Delta militancy at unimaginably great cost in material and human resources.

Looking at these things, it is likely that this Shiite violent protest will not fizzle out soon because, the government has once again failed to manage a simple issue properly. The violence will likely continue because the Shiites are now determined to assert their humanity, even so, the humanity of their leader and his wife, whose sons were killed in 2015 during fracas with the military, either in life or death. And it does not look like the government is making any effort to avoid the exact mistakes it made in the previous situations which have become two of the biggest security threats in and to Nigeria’s corporate existence. This too, may not end soon.