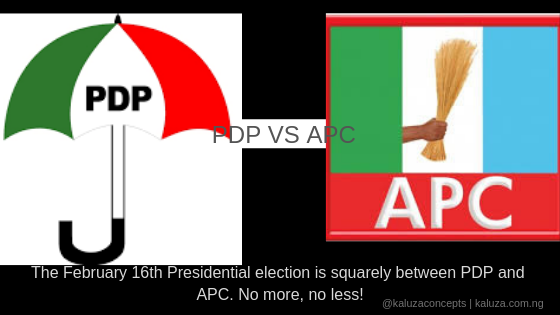 Irrespective of the party you vote in the Nigerian Presidential Election coming later this month, you are either voting for APC or against PDP and vise versa. There are arguments that APC and PDP have failed and as such, real progressives should not give their votes to either of them. In fact, the Nobel Laureate; Prof. Wole Soyinka, just recently admonished Nigerians to vote for neither APC nor PDP. In addition, some people have devoted time to champion campaign on social media where they tell people to vote their conscience in the sense that they should not vote for either APC or PDP. I totally agree that people should vote devoid of any influence, but also, I agree that they should understand the implication of their votes, for any party. Then, the third force arrangement which has obviously crumbled, still gives some people hope in that some Nigerians still believe that a third force can emerge and competently wrestle power from APC and PDP, who are the dominant political parties  in Nigeria, as of today.

The truth however, and of which is the correct interpretation of our political reality is that every vote goes to the party, not the individual as many people would love to think, because essentially, what we have is party based democracy. Not individual based. It is the party that sponsors the candidate and not the other way round. This simply implies that any serious contestant of an important national election like presidency must be a candidate of a strong national political party. It is clearly manifest naivety to assume that one can win an important national election with an unknown political party. To be sure, if we subject this third force arrangement to some interrogations, we will see that there don’t seem to be any difference in terms of readiness to govern. If the presidential candidates of those small parties failed to form an alliance all the while to create the third force required to give the other two major political parties a good fight, it simply means they are not ready. Election is not an emergency; this is to say that as far back as 2015, we are all aware that there will be General Elections in Nigeria in 2019. Why didn’t the third force proponents join forces all these years and build a formidable third force? Then suddenly, in 2018, they started gearing up to challenge established political parties in a party based political contest?  Without belaboring the obvious fact, such assumption that any of these Presidential contestants on the platforms of small, unknown political parties can give serious contest, amounts to wishful thinking and mere waste of time. Taking them serious and thinking that in voting them lies the solution, amounts to a huge joke. Obviously, they are not serious and you shouldn’t take them serious. No, these people need to stop toying with our sensibilities just because they have some credibility that appeals to educated Nigerians.

Another important fact is that these small parties with presidential candidates will cease to exist after the 2019 General Election. I mean this is the pattern and we all know it. To that extent, there is no different whatsoever, in truth, one will make no point at all, voting for any of these parties. No point whatsoever. As a matter of fact, they are much more disrespectful of Nigerians than these big political parties. Where were they all the while? How can they join a presidential election at the eve of the election, on the platform of a political party that has no regional, sub-regional, state, local government or ward popularity/acceptability and think they are going to win? Why didn’t they plan for the election a few years before, with these parties or form a coalition right on time, years before now and work towards a serious contest? Election is not an emergency; so for them to just jump into the contest clearly shows lack of commitment and seriousness. It’s just a joke. Therefore, the 2019 Nigeria’s presidential election is squarely a contest between APC and PDP, this should be very clear to all. 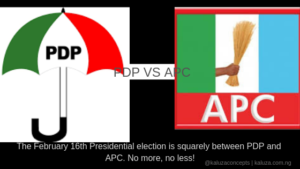 Now here is why any and indeed, every vote cast on February 16, 2019 is either a vote for/against APC and PDP, irrespective of what other political party you vote. We have already established that aside, APC and PDP, no other presidential contender is serious. In fact, they are opportunists, spoilers or pretenders. Even APC and PDP started preparing for the 2019 General Elections since 2015. These are established political parties. Yet, unknown parties jump into the contest in 2018 against 2019 and we think they should be taken serious? In any case, every valid vote cast in the presidential election, is either for/against APC or PDP. If you vote for any of these small, unknown political parties with presidential candidates, you are either helping APC to win PDP, or helping to ensure that PDP wins APC with lesser votes. The implication is that while your votes may have counted, it made no point because your ultimate goal of unseating the duo dominant parties will be defeated as one of them will still emerge winner, at the end. Your vote against APC and PDP won’t change anything. Rather, it helps one to have an edge over the other, at the end; you have not made your point. Don’t get me wrong. It is your right to vote for any candidate of choice whose party is in the presidential contest. But just know that either way, your vote for other parties helps one of the major parties, and undermines the other.  Then at the end of the election, that small party you voted for will cease to exist. This is what they all do. Sadly, educated Nigerians always fall for them every time, just because they look like the ideal candidate that fits our ideal worldview. We must come off it. Politics is reality, not assumption.

We should not allow these small parties to use our votes and validate their participation in the 2019 Presidential Election.