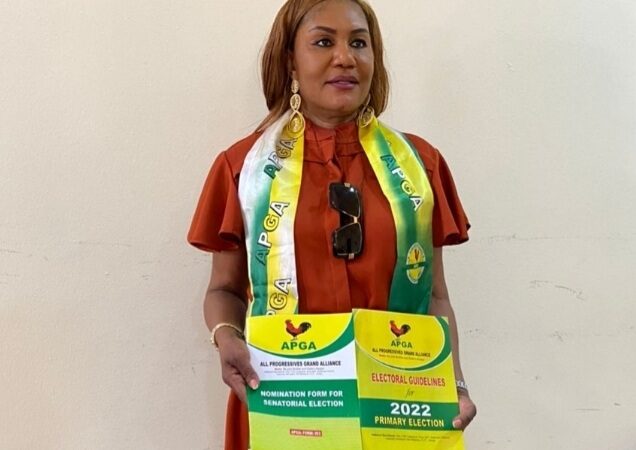 Wife of Anambra State Former Governor Picks APGA Nomination Form To Contest For Senate In 2023
The wife of the immediate past Governor of Anambra State, Dr. Mrs. Ebelechukwu Obiano, yesterday, picked her expression of interest and Nomination forms to contest for the Senate seat of Anambra North District in the 2023 General elections.
Dr. Ebelechukwu Obiano who was accompanied to the APGA National Secretariat in Abuja by Party members, stakeholders, Transition committee Chairmen and numerous supporters, purchased her Nomination forms to formally join the race having earlier declared her interest to go to the Senate Chambers.
Dr. Mrs. Obiano who made her intention known to her constituents and party faithfuls earlier last month at their country home of Aguleri in Anambra East Local Government Area, said the plight of the people, especially women and Children from rural communities of Anambra North informed her decision to hearken to the demonstrations and plea from various groups and organizations to Represent the zone at the 10th National Assembly.
The former First Lady and founder Caring Family Enhancement Initiative (Cafe) who has been an advocate for women, Children and downtrodden people in the society maintained that her interest is all about service to God and mankind and not just for the pleasure of political power.
Reacting to questions at the APGA National Secretariat, The Sun’s most supportive First Lady in Nigeria said she will continue her advocacy for a better life for women and children of Anambra North and Nigeria at the Senate Chambers; she will push for Bills and debate motions that will be in the interest of young people, widows, downtrodden people and children.
Osodieme who used her position as the First Lady to give hope to the hopeless in the society, cared for children with deformity and disability, built houses for homeless widows, rehabilitated and reunited mentally challenged people with their families, amongst many others said she will continue her divine call to be a blessing to humanity.
Climax of the event was the Solidarity support of the National Association of Nigeria Students (NANS) led by the President and Senate President, Comrade Sunday Asefon Adedayo and Comrade Chuks Innocent Okafor respectively. 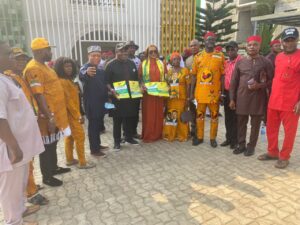 Mrs. Obiano at APGA National Secretariat with her supporters

The Leadership of Global Nigeria Students eulogized the former First Lady and praised her bold decision to join the race to the Red Chambers. The NANS National body acknowledged her many humanitarian services and philanthropy, her sincerity of purpose, and for identifying always with Nigeria Students; the body offered solidarity support and promised to mobilize entire Nigerian Students who are eligible voters in Anambra North to vote for her victory at the polls.
Amongst the many who endorsed Dr. Mrs. Ebelechukwu Obiano Senatorial ambition and pledge support in various capacities, the State Chairman of APGA in Imo State, Chief Paul Iwuala described Osodieme as an asset that must be protected at all cost. He maintained that her selfless service and committed support to her husband, the former Governor and present National Leader and BoT Chairman of APGA, Chief Dr. Willie Obiano has helped sustain and stabilize the party, however,  it’s time for the party to appreciate and reward their Leader for his uncommon leadership.
Chief Iwuala who called on Imo indigenes who are resident in Anambra North and eligible voters to ensure that their votes be casted for Osodieme at the polls, also appealed for every true son of Igbo land to see the project of Dr. Mrs. Ebelechukwu Obiano as a collective project for ndi Igbo.
“We trust in her capacity to speak for us, protect our interest and that of our region and Children, nkea bu nke anyi”, Iwuala said.